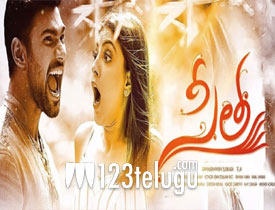 Star heroine, Kajal has pinned a lot of hopes on Sita as she is doing a powerful role for the first time in her career. The action drama which is directed by Teja has hit the screens today. Let’s see how it is.

Sita(Kajal) is a career-oriented woman who does not have any feelings. All she needs is to get her work done by hook or crook. In this process, she crosses paths with a dreaded MLA(Sonu Sood) who is after her beauty and wants to win her at any cost. In a crazy situation, she gets into a contract with the MLA to have a live-in relationship with him. Right when the time comes to obey the contract, she tries to get out of it by paying some big bucks.

Left with no choice, she goes back to her late dad’s property and tries to get it. But the twist in the tale arises when she comes to know that all her property has been handover to Ram(Bellamkonda Sreenivas) who is an innocent soul. The rest of the story is as to how Sita uses Ram and gets out of her problems.

The entire film belongs to Kajal as the title suggests. Kajal springs in a surprise in her role which has many negative shades. The star heroine’s body language, dialogue delivery are top notch in the film. The added bonus is her beauty which will attract the youth in a big way. Mannara Chopra is decent as her sidekick and so was comedian Abhinav Gomatam.

Bellamkonda Sreenivas had a very tough role to play and he did it with ease. In this film, he had no heroic dialogues, dances or thrills but the young hero did his role quite sincerely. His performance in the climax was very good. Both Kajal and Sai’s love-hate relationship has been showcased well by Teja.

As usual, Sonu Sood’s villain act was impressive. He as the dreaded Basava Raju brought his role to life with decent comedy angle which was executed through Tanikella Bharani. The film means business from the word go and the story is established well in the first ten minutes.

One of the biggest drawbacks of the film is Teja’s jaded narration. He does not make use of the interesting point and narrates the film in a haphazard manner. The film has a roller coaster kind of a feel as some good scenes are followed by some silly and meaningless episodes. Sadly, Bittiri Satthi’s comedy does not evoke any laughs.

The other problem of the film is Bellamkonda’s character which is not justified well. His role has no direction and acts according to the flow of the film which is uneven. The narration is old school in the second half and many scenes are just dragged for no use.

Also, the film has a very predictable story which does not excite in the second half. The manner in which Kajal realizes her love for Bellamkonda could have been showcased in a more effective manner. Her love for the hero happens all of a sudden with just one fight scene which looks odd.

Production values of the film are top notch as the visuals look quite impressive. Anup Rubens music is not at all impressive but his background score was okay. Dialogues by Teja were good and so was the production design. Kajal has been designed on a superb note as she looks beautiful in the film. Editing is below par as many scenes in the climax could have been edited out.

Coming to the director Teja, he has taken a decent concept but could not impressively set it in today’s time. He has extracted good performances from Kajal and others but his narration is jaded. He shows his brilliance as a director in many scenes showcasing Kajal’s ruthlessness but makes things mundane in the last part of the film.

On the whole, Sita is undoubtedly Kajal’s career-best performance and she leads from the front. Bellamkonda Sreenivas ably supports her with his sincere act but the boring and dragged second half makes the ride bumpy. If all you want is to watch Kajal in a never before seen avatar, do watch the film for her but there is nothing special or new which is being showcased here.