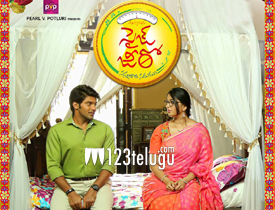 ​Anushka’s Size Zero has been in the news from quite some time now. After a huge round of promotions, the film which is directed by Prakash Kovelamudi has finally hit the screens​ today. Let’s see how it is.

Sweety(Anushka) is a cute looking girl who suffers from overweight issues. Even after so many attempts, her mother fails to get her married. Disappointed with rejection all the time, Sweety decides not to marry in the near future.

This is also the time when she meets Abhi(Arya), an NRI who makes documentary films. Sweety falls in love with Abhi and starts getting closer to him. Twist in the tale arises when Abhi starts shifting his loyalties towards his stylish close friend Simran(Sonal Chauhan).

Disappointed with rejection yet again, Sweety decides to join a weight reducing program called Size Zero. Will Sweety be successful in reducing her weight ? What problems does she face during this time ? and Will she win her love back ? That forms the rest of the story.

It would not be an exaggeration to say that Anushka is the only actress in Tollywood who can pull off such a role. The star heroine is just magnificent and makes the audience fall in love with her character and problems. Anushka is quite lively in her character and the hard work she has put in to gain weight clearly shows on screen.

Arya gives ample support to Anushka and performs well in his role. Prakash Raj once again impresses with his unique character. Sonal Chauhan is apt in her role and provides the necessary eye candy.

First half of the film is pretty good with ample entertainment and beautiful emotions. Special mention should also go to the way Anushka has been styled with her costumes. She looks cute and completely convinces in a chubby look. Urvashi is impressive in the role of Anushka’s mother.

Once again, yet another Tollywood film falls flat during the second half. After narrating the film so convincingly during the first part, the makers shift focus to things which could been easily mellowed down.

What could have been a very emotional and cute looking love story is spoilt with a unnecessary showcase of Size Zero weight loss program. The film deviates a bit during the second half as some unwanted scenes and emotions take center stage. The simplicity, romance and cuteness in the film is lost and makes things tedious.

Production values by PVP are good and credit should go to them for coming ahead to attempt a unique script like this. Camera work is very good and highlights Anushka and the surroundings quite well. Screenplay is let down during the second half as the film loses its grip a bit. Editing is sleek and M M Keeravani’s music score gels with the mood of the film well.

Coming to the director Prakash Kovelamudi, he had everything right for this film. Right from the story, star cast and performances, he manages to do a decent job. Had he taken a bit more care during the second half the effect and connect would have been even better.

On the whole, Size Zero is a film which has some interesting moments going its way. Interesting premise and a superb first half are basic positives of this film. If you manage to ignore the mediocre second half and predictable nature of the script, you can easily give this film a shot for Anuhska’s stunning performance and some feel good moments.