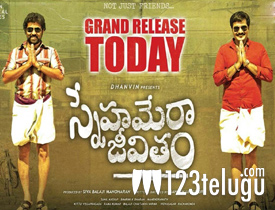 Noted actors, Rajiv Kanakala and Siva Balaji have joined forces for a film called Snehamera Jeevitham. Directed by debutant Mahesh Upputuri, the film has hit the screens today. Let’s see whether it manages to impress us or not.

Snehamera Jeevitham is all about two close friends Chalapathi(Rajiv Kanakala) and Mohan(Siva Balaji). When everything seems to be going well in their life, a small miscommunication leads to a major disturbance among the friends. What is that disturbance? How does it affect their friendship? Will both the friends reunite at last? To know answers to all these questions you have to watch the film in the theaters.

Rajiv Kanakala, who was seen as an aspiring politician did justice to his role. His dialogue modulation and getup were perfect and apt for the film’s mood. The 1980’s atmosphere recreated for the film is good.

Yet another actor, Siva Balaji is also very good in his role as a daring and kind-hearted person. His screen presence and performance bring depth to the proceedings to an extent. The girl, who acted as Siva Balaji’s love interest did an okayish job.

After an interesting opening shot, the first half takes its own sweet time to enter into the main story which is one of the biggest minuses of the film.

The way the story is narrated also looks a bit odd and over the top. The connection between the scenes was not showcased properly as things happen one after the another quite conveniently.

Two special songs which come at regular intervals are a big letdown and tests the audience patience. The heroine has nothing much to do as she is hardly seen once or twice in the second half.

The idea of choosing a friendship related story for his first film by director Mahesh Upputuri is good but he failed in his execution. The way he narrated too many subplots is not convincing at all. Cinematography by Bharani K Dharan is good as he recreated the 80’s mood nicely. Editing work is okay as the runtime of the film is hardly two hours. Music by Sunil Kashyap is decent as one melody song which comes in the first half is good. Production values for this limited budget film are good.

On the whole, Snehamera Jeevitham is a simple story of problems between two close friends. What disappoints is the way the film is narrated with too many subplots which do not create any interest. Those who like slow-paced proceedings with an old school narration can give this film a try and the rest can watch it when it is premiered on TV.