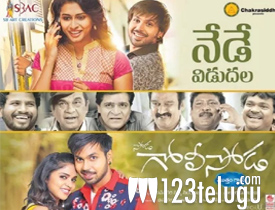 Continuing the trend of low budget films, yet another film which has hit the screens today is Soda Goli Soda. Let’s see how it is.

Srinu(Manas) is an aspiring actor who comes to Hyderabad to make it big as a hero. He meets a director called Koratala Vinayak(Ali) and makes him believe that he has a lot of money and will sponsor his own film. Impressed by this, Koratala starts shooting the film. Halfway through the project, the entire unit finds out that Srinu has no money and has cheated everyone. Who is this Srinu? Why did he target Koratala? and what is his background story? To know the answers, you need to watch the film on the big screen.

The love story showcased in the second half is decent. Heroine Nithya Naresh does a very good job in her role. Looks wise too, she impresses everyone and is good in the songs.

The various scenes showcasing the way hero turns into a good guy look decent. The way heroine Nithya helps the hero has been executed in a decent manner. Shakalaka Shankar’s comedy is good in bits and pieces.

The film falters big time with its execution as none of the crucial scenes manage to impress. The film starts off on a fun note then turns into a love story and finally becomes a social message oriented film. All the scenes showcasing these factors give a headache to the audience.

Performance by supporting cast like Krishna Bhagwan and others is over the top. Whenever they appear on screen, the story deviates completely. Songs are yet another hurdle for the free flow of the film. The basic conflict point is not established well at all.

Editing is pathetic as many scenes in the first half could have been edited out. Production values of the film are just about okay. Mujeer Mallik’s camera work is not up to the mark. Music is a big let down as the songs deviate the audience attention. Coming to the director Hari Babu, he has done a poor job with the film. Except for showcasing the love story well, he falters with his narration and irritates the audience with his disappointing narration.

On the whole, Soda Goli Soda is a disappointing commercial drama which has nothing going its way. Boring narration, over the top performances, bore the audience completely. The only saving grace is the love story between the lead pair. Apart from this, there is nothing much to look forward to this film and can be left alone this weekend.