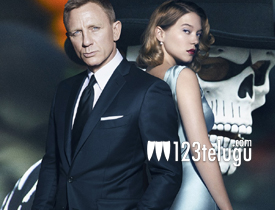 Whenever there is a James Bond film round the corner, the excitement among the audience is huge. Spectre is the 24th film that has come out in the James Bond franchise and we bring you a detailed review of this action thriller.

The film kicks of with James Bond(Daniel Craig) arriving in Mexico after a tip of from his ex-intelligence bureau chief. He finishes off two of the dreaded terrorists in Mexico city and takes down a government building. Coming harsh on his actions, the bureau’s new chief asks Bond to step down from his post.

But during his mission in Mexico city, Bond comes to know of a dreaded terrorist organization called Spectre which is run by Ernst Stavro Blofeld(Christopher Waltz). What is this Spectre all about ? How will Bond take on the deadly Starvro and destroy the entire organization ? That forms the rest of the story.

One of the major assets of Spectre are the breadth taking visuals. The various locations in countries like Rome, Mexico, London and Austria have been showcased in a splendid way. The long opening sequence of the film which is showcased without a single cut has been executed in a mind blowing way.

As expected in every Bond film, Spectre too has ample car chases, mind blowing action scenes and rich production values. Daniel Craig looks top class as James Bond and is exceptional in all his action sequences and gives an honest performance. Christopher Waltz does a decent job as the bad guy and so was the female lead Léa Seydoux.

One of the biggest drawbacks of Spectre is the routine story and jaded narration. The plot lacks novelty and the excessive length also does not help matters much. Even though the action sequences are good, they are not on par with previous Bond films.

Romance forms a huge part of every Bond film but sadly, the censors have eliminated all the scenes and made the film a bit boring. After a point of time, the film becomes a personal revenge drama and deviates from the topic. The so called emotions in regular Bond films are missing big time in Spectre.

As said earlier, the film is technically brilliant. The way camera work showcases the different locations and captures all the slick action moments are just wonderful. Even though director Sam Mendis chooses a simple story, the way he has executed some important scenes during the first half is pretty good. Background score by Thomas Newman is stupendous and elevates the thrills and emotions to a decent level. Editing is pretty average as some unnecessary scenes during the second half could have been easily edited.

On the whole Spectre is probably one of the weakest films in the James Bond franchise. High octane action sequences and some mind blowing visuals are major assets. On the flip side, a pretty ordinary story, jaded narration and lack of romance spoil the experience big time. If you are a true James Bond fan and do not mind all these hiccups, you can easily give this film a shot for its stylized action.