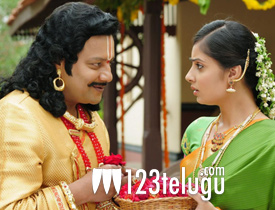 Sri Chilikuri Balaji is a religious film which has Sai Kumar playing the lead role. Directed by Sridhar, this film has hit the screens today. Let’s see how it is.

Madhava(Sai Kumar) is an atheist who does not believe in God. One fine day, he comes across a person who asks for financial help to go to Tirumala. But Madhava irritates him and says that there is no God and sends him away. But as time passes by, Madhava starts believing in God and decides to go to Tirumala one final day. During his journey to the holy shrine, he accidentally meets the person whom he denied help. Who is this person? Why did he appear again in Tirumala? and what is the connection between Madhava and him? To know the answers, you need to watch the film on the big screen.

Sai Kumar did a good job as an atheist. Bhanu Sree Mehra who did the role of Sai Kumar’s wife was the best of the lot. She looked serene and did her simple role quite efficiently. Bhanu Chandar was decent as the aged man.

Bala Subramanyam was good in a cameo. As the film is narrated in a very realistic manner, certain scenes and religious episodes look quite good and natural on screen. The way the religious story has been showcased in a crisp and convincing manner is also a good asset for the film.

Dubbing is a let down in the film. The lip sync is totally missing for the artists. The way Sameer’s episodes to disturb Sai Kumar in his journey has not been showcased well and disturbs the flow of the film.

The way Sai Kumar changes as a God fearing person could have been showcased in a better way to create more impact. This part has been rushed away in the narration. This film is quite serious and will only be liked by those who have an eye for religious movies.

Special mention should go to the way the religious dialogues have been written. Dialogues written about the existence of God generate a good effect on the audience. The camerawork is decent. The VFX work done to showcase the mythological set up has been done well. Editing is super crisp and so was the art direction. Coming to the director Sreedhar, he has done a decent job with the film. The way he has clubbed the real-life incident with the mythological set up is impressive. Had he worked a bit more on the emotions things would have been even better.

On the whole, Sri Chilukuri Balaji is a religious drama which has some decent moments said in an interesting way. The film takes a lot of time to get into the actual story but once it picks, it engages you to an extent during the second half. This film is a clearly a religious drama and all those who have an eye for such movies will only like it.