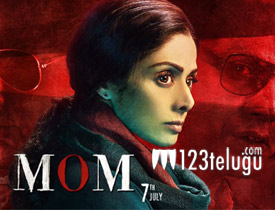 It has been quite a long time since we had seen Sridevi on screen. After a gap of two years, she is back with a hard-hitting revenge drama called MOM. The dubbed version of this Hindi film has hit the screens in Telugu. Let’s see how it is.

Devaki(Sridevi) leads a happy life with her husband and two daughters. The only disappointment in her life is that one of her kids, who is her stepdaughter disowns her all the time. Left with no choice, she continues with her life.

The twist in the tale arises when her daughter gets brutally raped by her classmates. The family goes to court but loses the case badly. Upset with this, she decides to take the revenge herself. How did she manage to do that is the whole film all about.

MOM is completely Sridevi’s film from the first frame. The star actress gives a mesmerizing performance and lights up the screen. You are moved to tears with her performance in many scenes as Sridevi showcases such majestic emotions when she knows about her daughter’s rape and during the climax.

National Award-winning actor, Nawazuddin Siddique plays his supporting role quite well. His getup and the slight comic touch to his role elevates the proceedings well. A R Rahman’s background score will surely give you goosebumps in many areas. The simple proceedings are taken to another level with his score.

The first half has some good court scenes whereas the second half has gripping investigation and crime scenes. Akshay Khanna is good in his cop role.

The story of the film is quite old and has nothing new to offer. The basic motto of the film is a revenge drama and there is no novelty factor here. The film is also painfully slow as such thrillers need to be wrapped up quickly.

After maintaining the tempo of the film nicely till the pre-climax, the proceedings get way too filmy and routine. The cops losing out on major clues and missing out on logics have been left out in many places. The way Sridevi gets away with major crimes is also not showcased properly.

Production values by Boney Kapoor are stunning. The film is made on a low budget but looks quite rich in visuals. As said earlier, MOM shines majorly because of Rahman’s music score. The screenplay is the biggest asset of the film as a routine and old story is showcased with some very interesting scenes.

Coming to the director Ravi Udaywar, he has done a decent job with the film. Even though he chooses a routine script, he justifies it with his direction capabilities which fill the film with tense and emotional moments.

On the whole, MOM is a pretty decent revenge drama which has stunning emotions at regular intervals. A routine story is made watchable only because of A grade actors like Sridevi and Nawazuddin Siddique. The film is a bit slow and lacks basic entertainments which regular film lovers look forward to. If you are the who likes serious films and crime sagas, MOM is surely the one for you.