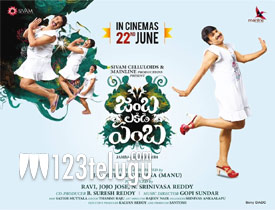 Srinivasa Reddy is back as a solo hero with today’s release Jamba Lakidi Pamba. Let’s see whether the film lives up to all its hype or not.

Varun(Srinivasa Reddy) and his wife(Siddhi) are a couple who decide to take a divorce because of their ongoing differences. This is the time when a very interesting supernatural element happens and the lead pair’s gender gets interchanged. What will happen now? How does Varun who is a girl now solve all his problems and get his divorce finalized? That forms the rest of the story.

The performances of the actors in the film are okay. The film is filled with A-list comedians and everyone does justice to their roles. Vennala Kishore is hilarious as the divorce lawyer. As usual, his one-liners and punch dialogues work well whenever he is on screen.

Srinivasa Reddy does the female act well and creates some comedy in the second half. Posani’s role is quite crucial and he brings some depth to the film. Jabardasth Appa Rao is decent in his role during the last ten minutes and so was Satyam Rajesh as his boss. The interval bang is interesting and sets up things quite well for the second half.

The director loses track of the film during the first half itself as he does not enter into the main storyline till the interval point. Silly comedy, the establishment of unnecessary characters kill the interest of the audience in the first half.

After watching the interval block, you feel that things will work well now but the director loses out on a good opportunity by some wayward direction. The film moves to a village with unnecessary subplots entering the scene and creating distraction time and again. This is where you miss E V V Satyanarayana’s direction as with the same concept he managed rib-tickling comedy.

The length of the film is also very long as a simple line is stretched to no extent. Srinivasa Reddy is picking good subjects but to his bad luck, the narration is lacking that punch. Same was the case with Jayammu Nischayammu Raa. Both these films have a decent setup but are bogged down by some disappointing direction.

Gopi Sundar’s music is decent as two songs have been composed well. But sadly, they come in as speed breakers. The film needs serious editing as close to 15 minutes can be easily trimmed right away. Dialogues are fun and so was the production design. Camera work is good but the production values are just about okay.

Coming to the director Murali, he once again disappoints with his second film. He has chosen a decent line as his story but he has failed to evoke basic laughs in the film. Just by having A-list comedians things do not work all the time and the same happens with his direction in Jamba Lakidi Pamba which goes for a toss.

When you decide to recreate subjects which are iconic such as EVV’s Jamba Lakidia Pamba, one needs to be very careful and make sure that there is ample entertainment from the word go. But sadly, 2018’s Jamba Lakidi Pamba does not manage to create that effect in spite of having all the top comedians playing crucial roles. Except for their screen presence this film ends up as a very disappointing watch this weekend.