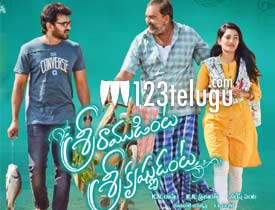 Continuing the trend of low-budget films, Sreeramudinta Sreekrishnudanta is one film which has created a good pre-release buzz. The film has released today and let’s see how it is.

Nandu(Deepthi Shetty) is a village girl who wants to find a job at any cost in Hyderabad. She meets an agent called Gautam(Shekhar Varma) and handovers him some money for her job purpose. Things take a U-turn when Gautam runs away with that money.

Left with no choice, Nandu heads back home. During her journey, she comes across Gautam and catches him red handed and brings him to her village and assigns him to her father. Who is this Gautam? What does he have to do with Nandu? Why did he run away with her money? How will he come out of this mess? To know answers to these questions, you need to watch the film on the big screen.

The native backdrop looks good and the family drama that is revealed once the hero enters heroine’s home has been showcased well. The way heroine’s dad’s role has been designed is quite impressive. Also, the performance by Madhusudhana Rao is good during this time. Deepti Shetty is apt as the village girl and is also good with her performance.

The camera work and production values are top notch as the film has been shot in lush green locales which look pretty good on screen. Hero’s sacrifice for the heroine and the emotional drama has been handled well in the film. The climax is very impressive as the director has handled it in a very mature manner.

The director takes his own sweet time to establish the relationships and mentalities of the main cast and because of this, the proceedings look a bit lengthy. The same is the case for the scenes featuring heroine’s dad and hero. They look a bit repetitive after a point. The comedy that is generated through heroine’s friends batch is quite boring.

The way hero’s real intentions are revealed look a bit too filmy. Even though the climax is good, it has been wrapped up on a quick note. The title has also no proper justification to the proceedings showcased.

As said earlier, camera work by Jayakrishna is very good as the rustic village visuals have been showcased quite decently. Editing is just about okay and so is the screenplay. Coming to the director Naresh, he has done an okay job with this film. Even though, he had a good plot, the way he executed it is partially okay. Some of his scenes look a bit lengthy and repetitive but overall his attempt is good for a debutante.

On the whole, Sreeramudinta Sreekrishnudanta is a passable family drama which has been fairly handled by debutante director Naresh. However, some repeated scenes and lack of known faces can go against the film. Collections wise, the film might not do well but the rustic village visuals, endearing performances and the feel good story line makes this film worth a shot this weekend.