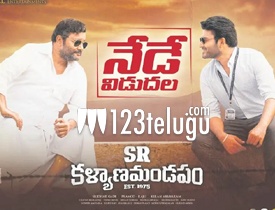 SR Kalyanamandapam is a film that has created a good buzz for itself in the last few days. Starring Kiran Abbavaram, this film has hit the screens today. Lets see how it is.

The film is a set in the small town of Kadapa district. Kalyan(Kiran Abbavaram) is a happy go lucky youth who is in neck deep love with Priyanka Jawalkar. But not many know that Kalyan has an ego issue with his dad(Sai Kumar) and has not spoken to him in the last ten years. What is the problem between the father and son?. How does Kalyan solve it? and where does SR Kalyanamandam feature in all this? That forms the rest of the story.

This is young hero Kiran Abbavaram’s second film as a hero and he shows great maturity. Be it his dialogue delivery or screen presence, Kiran does quite well. He was exceptional in all the emotional scenes and carried the film on his shoulders. Priyanka Jawalkar gets a good role after a long time and she too does quite well.

The comedy quotient in the film is decent as scenes between the friends and lead pair’s love story have been handled well. All the actors who play hero’s friends have done well. The climax has good emotions and is ended on an impressive note.

Last but not the least, Sai Kumar is seen in a crucial role after a long time and he does quite good. He looks subdued during the first half but does well as the drunkard father who is going through a turmoil. The second half of the film has decent story and the emotions between the father and son work well.

Kiran Abbavaram is known for his settled acting but in this film, the director has highlighted his mass angle and this aspect goes for a big toss. The hero’s introduction and buildup shots are close to ten minutes and this aspect irritates big time.

The film needs serious editing as close to half an could have been chopped off. The father and son relationship is handled well in the climax but it should have been elevated more in the first half instead of the silly scenes between the lead pair and hero elevation.

Also, the story is quite routine and you know what is going to happen next. Such stories work on emotions and the film had solid chance to elevate these emotions but the director missed on these aspects big time.

The film has some good visuals and the small town set up has been showcased well. Music by Chaitan Bhardwaj is impressive as most of the songs are good and have also been shot well. Editing is a big mess.

Coming to the director Sridhar, he has done just a passble job. He had good scope to elevate family drama but missed out on it. Had he packed the first half with more father-son scenes and avoided unnecessary hungama of the hero, the film would have been quite good.

On the whole, SR Kalyanamandam is a father-son story with a good backdrop. Kiran Abbavaram and Sai Kumar do well in this village drama and hold the screen. If you ignore the unnecessary build up scenes and lag in the first half, this film ends as a passble watch for the songs and some good emotions in the second half.