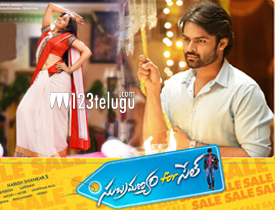 After the debacle of Ramaiyya Vastavaiyya, Harish Shankar is back to prove a point with Subramanyam For Sale. Starring Sai Dharam Tej and Regina, this family entertainer has hit the screens after a huge round of promotions. Let’s see how it turns out to be.

Subramanyam(Sai Dharam Tej) is a money minded youth who goes to the US to earn big bucks. One fine day, he comes across Seetha(Regina) who ditches her family for her long time boyfriend. As time passes by, Seetha gets cheated by her boyfriend big time and is left stranded in the states.

As expected, Subramanyam comes to Seetha’s rescue and solves all her problems. Twist in the tale arises when Seetha requests Subramanyam to come along with her to India and clear the chaos which was created by her elopement.

Subramanyam accepts to this proposal by demanding a huge amount. The couple lands in India and to their surprise, the entire family misunderstands them to be already married. What will Subramanyam do now ? Will he keep his money minded nature aside and help Seetha ? That forms the rest of the story.

The entire credit should completely go to director Harish Shankar. This man surely knows the mass pulse and has infused masala entertainment through out the film. Whenever you think the film is getting routine, he surprises you with some hilarious comedy episodes. Perhaps, it will take another director a very long time in the future to showcase Dharam Tej the way Harish does in the film.

Right from his look to his dances, Teju nails it with his performance. This mega hero is here to stay and will achieve star status with this film. Teju puts his striking resemblance of his uncles Pawan Kalyan and Chiranjeevi to superb use and impress big time. He is pretty good with his fights and has a stunning screen presence.

Regina is yet another major attraction of SFS. She oozes glamour and is a treat for all the front benchers. Subramanyam For Sale also clicks big time because of her sizzling chemistry with Tej. The couple are inseparable and look perfect on screen. After a long gap, Brahmanandam gets a meaty role and all his scenes with Tej have come out well.

The surprise package of the comedy part is Fish Venkat. His funny English one liners are a laugh riot. Rao Ramesh, Naga Babu and Ajay do their respective roles well. First half is youthful with colourful US visuals where as the second half is filled with family emotions and comedy. Kota was hilarious in his cameo.

Story of the film is age old and has nothing new to offer. Things get predictable right from the beginning and a weak climax slows down things. Also, certain double meaning jokes and mass elements look over the top and could have been mellowed down.

Seasoned stars like Suman and Naga Babu have nothing much to do in the proceedings. Second half of the film gets a bit wayward at times and certain logics go missing big time.

Major credit should go to Dil Raju for shooting this film in such a grand scale. All the locations chosen in the US and the way they have been shot is exceptional. Dialogues are edgy and evoke good fun. Music by Mickey J Meyer is a huge asset as all the songs are quite peppy and have also been shot lavishly. Screenplay is also very impressive as some cleverly packaged scenes are placed in right areas.

Coming to the director Harish Shankar, he is back with a bang. The man who stole the limelight for showcasing Pawan Kalyan in a new avatar does it again with his nephew. The way he presents the upcoming hero and infuses a series of entertaining episodes through out the film will be lapped up by one and all.

Tollywood churns out big budget commercial entertainers once in every two weeks and half of them have the same story. But the films that click are narrated with hilarious entertainment and Subramanyam For Sale falls in this very same category. SFS will be a turning point in Sai Dharam Tej’s career and will put him into the big league. If you manage to ignore the routine and predictable story line, this film will entertain you from the word go and ends up as a paisa vasool entertainer.