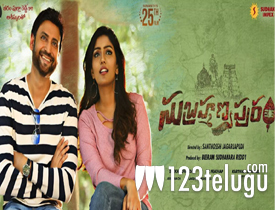 After bouncing back to form with his previous film, Malli Raava, hero Sumanth has joined hands with debutant director Santossh Jagarlapudi for a supernatural thriller, Subrahmanyapuram. The film has Eesha Rebba as the female lead, while veteran actors Suresh and Saikumar play crucial roles. Beeram Sudhakar Reddy has produced the film. Amid a decent buzz, the film has hit screens worldwide today. Let’s see what worked and didn’t in it.

The film’s story is primarily centered around a mysterious village named Subrahmanyapuram. Sumanth, a staunch atheist from Hyderabad, lands in Subrahmanyapuram as part of his research about gods.

On the other hand, a series of mysterious suicides grip the entire village in fear. All the superstitious villagers claim that the suicides are happening due to the fury of the Lord Karthikeya. At this point, Sumanth sets out on a mission to unearth the mystery behind these suicides. Will he be successful in finding the truth forms the rest of the story.

The intriguing storyline is the main highlight of Subramanyapuram. Especially, certain events in the second half engage the audience till the end. The core story doesn’t get diluted with unnecessary elements and the crucial twist during the pre-climax is interesting.

Sumanth is top notch in his role of an atheist. His performance in the scene where he confronts the villagers stands out. Eesha Rebba looks good in her girl-next-door character and also emoted well throughout the film. Senior hero Suresh gets a meaty role and he plays it well.

The major drawback of Subrahmanyapuram is that the film gives a dejavu feeling of Nikhil’s 2014 hit supernatural thriller, Karthikeya. Starting from the beginning, the entire screenplay of Subrahmanyapuram, including hero’s characterization and the climax twist, is heavily influenced by Karthikeya. This predictability hampers what could have been a riveting experience.

After an intriguing first act, the film runs at a slow pace until the suspense-filled interval. The mysterious suicides get repetitive after a point. Sumanth’s role is quite passive in the first half as he does not have much to do.

Director Santhossh Jagarlapudi does an ok job in his debut. He chooses a very familiar story and also runs it on a predictable setup. However, he manages to maintain the intrigue factor in the second half with some interesting twists.

The film’s production values are adequate. Sekhar Chandra’s background score and a couple of situational songs are impressive. Camera work in some night sequences is quite good, but enough care should have been taken in some of the indoor scenes. There are a couple of lackluster scenes in the first half which could have been edited out.

On the whole, Subrahmanyapuram is a passable mystery thriller which has some decent thrills. However, the audience has to patiently wait until the pre-interval sequence to experience the actual drama. The film is clearly aimed at the A center and multiplex audience and will please their sensibilities. Finally, all those who have watched Karthikeya would find the setup familiar, but for those who did not, this films ends as a decent watch this weekend.