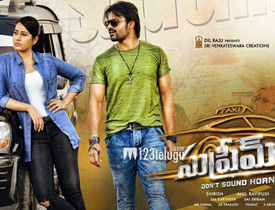 Sai Dharam Tej is slowly but steadily growing up the success ladder. His latest presentation is Supreme which has hit the screens today after a huge round of promotions. Let’s see how it is.

Balu(Sai Dharam Tej) is an aggressive taxi driver who stumbles upon a young boy(Mikhail Gandhi) and takes care of him along with his father(Rajendra Prasad). Twist in the tale arises when the young boy is suddenly kidnapped and taken to Orrisa.

Left with no choice, Balu decides to go to Orrisa and bring the little kid back. But to his shock, he comes to know that a dreaded gang headed by Kabir Singh and Ravi Kishan is behind all this. Rest of the story is as to how Balu fights against all odds and saves the boy along with his girl friend(Raashi Khanna).

One of the biggest assets of the film is the fun part. Credit should completely go to Anil Ravipudi for inducing hilarious comedy at regular intervals. First half of the film is pretty entertaining and has all the elements which will go well with everyone.

Sai Dharam Tej is completely at ease now and shows superb improvement in his performance and dances. Interesting aspect is that the young actor allows others to take centre stage and still looks confident in what ever he does on screen.

After a long gap, a Tollywood heroine gets an interesting role. Raashi Khanna is superb as Bellam Sridevi and evokes good laughs. Her looks and funny antics with Vennela Kishore are good. The comedy track featuring Pruthvi and Prabhas Seenu works wonders for the film and generates hilarious comedy.

Ravi Kishan is also good as the comedy villain and his chemistry with Shaking Seshu has been executed well. Rajendra Prasad and Sai Kumar are okay in their supporting roles. Mikhal Gandhi, who does the role of the little boy is superb and all the emotions conveyed through him are wonderful.

Once again, story of the film is a huge let down. After the first fifteen minutes, you exactly know what is going to happen next. Second half of the film moves on a single thread and does not have many interesting moments.

One devotional song that comes during the second half could have been edited out to make the film racy. Logic goes for a toss in certain areas. The way Sai Dharam Tej goes about searching for the little boy in Orrisa and some of his heroic moments look silly at times.

Supreme has superb production values as the film is shot in beautiful locations. Camera work during the Andam Hindolam song is top notch. Screenplay is simple and does not deviate from the topic. Music by Sai Karthik is pretty impressive as all the songs have been composed and shot well.

Coming to the director Anil Ravipudi, this young director has caught the pulse of the audience big time. Even though he chooses a routine and predictable story line, the way he adds entertainment throughout the proceedings shows his talent and also ticks with the film well.

With Supreme, Sai Dharam is surely going to go one step higher towards his stardom. Entertaining comedy through out the film and some well executed emotions are basic assets. If you ignore the predictable story line and go with the flow of the film, Supreme is a typical popcorn entertainer which will not disappoint you this weekend.