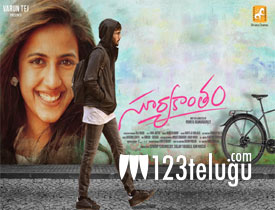 Suryakantham is one film which mega daughter Niharika has pinned a lot of hopes on. The triangular love story has hit the screens today and let’s see whether Niharika gets a much-needed break in her career.

Abhi(Rahul Vijay) is a simple and easy going guy who falls for a chirpy, confused and unpredictable girl called Suryakantham(Niharika). He proposes to her but the commitment-phobic Suryakantham leaves Abhi in the middle of everything and goes missing.

A year passes by and Abhi moves on with his life and decides to get married to Pooja. When everything seems to be going fine, Suryakantham gets back into the life of Abhi and turns things upside down. What will Abhi do now? Whom will he marry finally? To know the answers watch the film on the big screen.

The film is completely centered around Niharika and she does a good job in a tailor-made role. Initially, she starts off as a chirpy girl who is full of life and this part was nicely portrayed by the young heroine. But Niharika shows her talent in the second half when she is supposed to showcase jealousy, heartbreak. She had some difficult scenes to perform and Niharika pulled them off with ease.

Hero Rahul Vijay is a perfect fit in the role of a confused guy and does well in his simple act. His chemistry with Niharika was decent enough. The second heroine, Perlene Bhesania looks good and also did her role with a lot of responsibility.

Suhasini’s track with Niharika is good as both the actors share a good comradery on screen. The second half has some decent family emotions which are executed well. Comedian Satya is very good and brings good relief with his fun act. Sivaji Raja was also neat as the hero’s dad.

The film has similarities with many Hindi films in the past. Niharika’s role is tailored around Kareena Kapoor’s role in Jab We Met and there are many scenes which instantly remind you of hit romantic films from yesteryears. The pace of the film is quite slow and the proceedings are very predictable. There is nothing new in terms of the story that you will see here.

The ending of the film looks jaded. The makers should have narrated things in a better manner to make it easy for the audience. The manner in which Niharika’s role is ended needed more clarity as some more dramatic scenes would have made sense. Also, her role is not perfectly executed as the thread of her character is a bit confusing.

Production Values of the film are top notch as the movie looks rich and contemporary. The film’s music is pretty good and even better was the BGM which elevates the love story well. Niharika has been styled quite well and she looks beautiful even in the emotional scenes as well. Lyrics are good and so was the production design.

Coming to the director Pranith, he has done an okay job with the film. He starts off the film well and also establishes Niharika’s character nicely. But he brings the twist all of a sudden and does not give correct reason for the heroine going missing from action. Just when you think the emotions are right, some silly scenes spoil the proceedings time and again. The manner in which he dealt with the whole triangular love story looks jaded as more clarity could have been very good.

On the whole, Suryakantham is a better film when compared to Niharika’s previous duds. She has improved a lot and carries the film with her decent performance. Story-wise, there is nothing new you will see here and the pace of the film is also slow. But there are a few feel-good moments in the love story which make the proceedings lively and impress the A center audience. Watch it only for them.