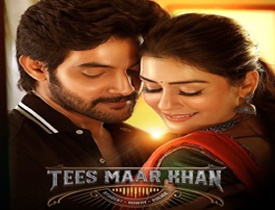 Tollywood young and talented actor Aadi Saikumar collaborated with Kalyanji Gogana for the mass action thriller Tees Maar Khan. Paayal Rajput is the leading lady. The film has hit the screens today. Let’s find out how it is.

Tees Maar Khan (Aadi Saikumar) and Vasudha (Poorna) who suffer from parental abuse move out of their respective houses. Vasudha, who is the elder among the two, takes good care of Tees Maar Khan. Hence, Tees Maar Khan treats Vasudha as her mom. Years later, she gets married to Chakri (Sunil). On the other hand, Tees Maar Khan lands in a tussle with Jeeja (Anoop Singh Thakur) who is a mafia don. Due to this, his family gets targeted and Vasudha gets killed. Frustrated by his mother’s death, Tees Maar Khan sets out to take revenge. Watch the film to know how the protagonist takes on the goons.

The last 40 minutes of the film are pretty good with a few unexpected and solid twists. Till then the film would be a routine fare but suddenly the momentum shifts and catches the attention of the audience.

Aadi Saikumar is pretty good in his role. His character has three shades and he excels in all of them. He acted with ease. Particularly in the emotional and fight scenes, his performance is fabulous. He has got a lot more potential which can be explored by the directors.

The scenes involving Aadi and Poorna came out very well. The bonding between these two characters is well established in the starting phase of the film even though they feel routine. The action blocks are well choreographed and they look stylish. Sunil, Poorna, and Srikanth Iyengar did a fine act in their respective roles and add depth to the film.

The first half is badly executed. The lead pair’s love track is not showcased properly and lacks freshness. Heroine falling easily for the protagonist is a beaten to death concept. Paayal Rajput doesn’t have much scope in this commercial movie and is restricted to songs.

The second half starts on a boring note. Even when the proceedings in the last hour turn out to be interesting and gripping, an item song comes out of nowhere which wasn’t necessary. Not all the commercial films need an item song which doesn’t fit into the narrative. The other songs too just add to the length of the film.

Anoop Singh Thakur and Kabir Singh are just like any other commercial film villains and they really don’t have much importance. Many scenes remind us of previous films. The abduction of people by the character Jeeja is not clearly depicted. The film should have concentrated more on this aspect as it is shown as one of the major points initially.

The background score by Sai Kartheek is fair enough and gives the feel of watching a commercial entertainer. Camerawork by Baal Reddy is subpar as he used old time lapse shots which look odd on the big screen.

The editing by Manikanth is decent. Production values are decent. Coming to the director Kalyanji Gogana he has done a okayish job with the second half while his execution in the first hour is bad. He extracted good performances from the main characters and he placed the twists well. However just relying on the final episodes doesn’t help the film completely. He should have taken more care on the lead pair track and most importantly on the first half.

On the whole Tees Maar Khan is bearable due to its twists and the portions towards the end are the saving grace. Aadi Saikumar is good but on the flipside, routine love track, lack of proper execution in majority of the sequences, and unnecessary songs play spoilsport. Just give this film a shot but without any expectations.