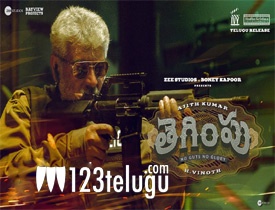 One of the Sankranthi biggies Thunivu starring Ajith Kumar is out in theatres now. The movie is dubbed and released as Thegimpu in Telugu simultaneously. It stars Manju Warrier in another crucial role. Let’s see how it is.

A cop strikes a deal with a group of goons who plan to rob Your Bank in Visakhapatnam and share the looted money. The gang commences their plan and enters the bank only to realize that there is another person, Darkdevil (Ajith Kumar) inside who also came to rob. He takes down a few goons and makes the customers, employees, and other goons his hostages. Who is he? Why did he plan to rob the bank? Who is helping him out? The main film has all the answers.

The main theme of the movie is about banking frauds and stock market frauds that are common in an economy. The director tried to throw light on how public funds are being misused by a few corporate giants. It is relatable to middle-class people who invest their hard-earned money in different investment avenues.

There are fun scenes between the mentioned fraudsters and Ajith in the second half which evoke decent laughs. These scenes provide nice entertainment at a time when the film gets boring. There are a few characters like a news channel employee, and a corrupted cop which are designed naturally and provides relief.

Last but not the least Ajith Kumar shines all the way with his excellent screen presence and mannerisms. The way he dances, his evil laugh, his performance, and everything about him is nicely presented in the way that fans expect from Ajith. Manju Warrier, Samuthirakani, and others are decent in their respective roles.

The biggest drawback is the uneven screenplay which at times tests the patience levels. For the most part of the film the narrative moves in a clueless manner and one wonders where the movie is actually heading. After starting the movie in an interesting way, the graph dips and there are only a handful of moments that engage and the rest don’t. The director tries to cover it up by having Ajith at the forefront, but he doesn’t get away completely.

A few portions don’t have any logic and it is surprising to see them coming from a talented filmmaker. The action scenes towards the end are badly executed. There is a flashback episode for Ajith’s character which isn’t gripping or engaging either. The emotional connection is totally missing in the movie.

The main point should have been established a bit earlier in the movie and the songs could have been completely avoided. The basic premise is fine but more efforts should have been taken regarding the screenplay. There is no continuation in a few places as the film jumps from one sequence to another in an improper manner.

The BGM by Ghibran is decent but the songs didn’t make an impact. The cinematography is fine but the movie’s length could have been slightly reduced. The production values are good. The Telugu dubbing is fair.

Coming to the director, H.Vinoth, he did a below-par job with the movie. He has taken a good plot but has not succeeded completely in coming up with an engaging screenplay. Though he places good moments here and there, the film as a whole remains underwhelming.

On the whole, Thegimpu is a half-baked heist thriller that impresses only in parts. There is Ajith’s swag all over the movie but the same is not the case with the narrative. Though the message conveyed is nice, the flaws outweigh them and hence the movie ends up just an okay this weekend.