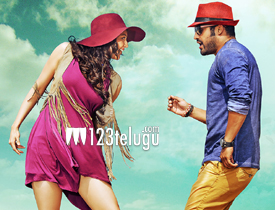 Young Tiger NTR, is going through a low phase as some of his previous films have failed miserably at the box office. He is now back with Puri Jagan’s Temper which has hit the screens today. Let’s see how it is.

Daya (NTR) is a fully corrupted police officer who gets transferred to Vizag. There he joins hands with Walter Vasu(Prakash Raj) and treads the corruption route.

Twist in the tale arises when Daya’s girlfriend(Kajal) gets accidentally kidnapped by Walter Vasu. This incident makes Daya very angry and he goes against Vasu and his empire.

During this time, Daya also comes to know that there is a bigger motive behind this kidnapping. What is that motive ? Will Daya manage to find out the truth and punish the culprits ? That forms the rest of the story.

Credit should go to Puri Jagan for showcasing NTR in a never before seen avatar. Right from his look to the powerful character he has portrayed, NTR looks a million bucks and is the major highlight of the film. The way he has balanced his character especially during the climax is out standing. NTR’s body language and dialogue modulation are at peaks during this part. You will see a new NTR in this film and credit should go to him for portraying such a diverse role.

Prakash Raj once again proves his mettle and gives a decent performance. He looks perfect and all his confrontational scenes with NTR have come out extremely well. Kajal looks gorgeous and provides the necessary glamour. Madhurima is quite good in her role and brings in the necessary impact.

Posani is superb as NTR’s sidekick and evokes awesome emotions throughout the film. Second half is the heart and soul of the film and runs on a emotional mode. The court episode during the climax evokes thumping applause from the audience and has been handled quite effectively. Chemistry between Kajal and NTR is outstanding.

First half of the film is just average. Had Puri brought in some basic entertainment values during this part, the output would have been even more effective. Kajal has absolutely nothing to do in the second half.

Story of the film is quite routine and gets predictable. Subjects like these have been dealt many a times in the past. Sonia Aggarwal is wasted in her role.

Anup Ruben’s music is decent as all the songs are peppy and have been shot stylishly. Production values are superb as the makers have not compromised on the visuals. Camera work is top notch and showcases Vizaq beautifully. The way NTR has been presented in a all new attitude is pretty good. Lyrics are quirky and gel with situations quite well.

Dialogues need a special mention as they have been written with a lot of impact. Screenplay of the film is below average in the first half and only picks up during the second half. Puri Jagan is at his supreme best when he deals with stories based on cops. The way he has extracted performance from NTR is excellent. Puri also manages to showcase the problems in the society in a interesting manner and narrates the film quite crisply.

On the whole, Temper has everything which NTR fans can eagerly look forward to. NTR’s stylish look and super strong characterization are major assets of the film. If you can ignore the routine story, you are in for an emotional entertainer which is going to become a perfect comeback hit for Young Tiger.

(Note : We are the media partners of the film and it is not ethical to rate a movie that we have promoted. As a result, we are not giving a rating. Read the review and watch the film).
Reviewed by 123telugu Team