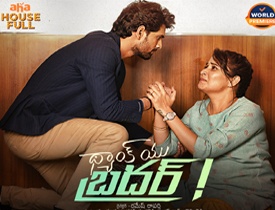 Anasuya has been doing some interesting films off late and the latest one in her kitty is the emotional thriller Thank You, Brother. The film is out on AHA and let’s see how it is.

The film deals with the lives of Priya (Anasuya) and Abhi (Viraj Ashwin). Priya is a pregnant widow and Abhi is a rich spoilt brat who has no ethics in life. One fine day, both Abhi and Priya get stuck in a lift and hell breaks out loose as Priya’s water breaks. What will happen now? How will Priya survive? Will Abhi help Priya? That forms the rest of the story.

The story idea is good as the director showcases two contrasting people who get stuck in a weird situation. The film has good emotions in the second half and some pregnancy-related scenes and the way the hero connects to it have been showcased in a superb manner.

Viraj Ashwin is good in his rich guy’s role. He does well as an arrogant guy and transforms well in the last part which has a lot of scope for performance. Viva Harsha does well as the friend and Anish Kuruvilla is impressive as the doctor. Aadarsh Balakrishna is also good in his cameo.

Last but not the least, the star attraction of the film is Ansuya. The happening actress is amazing as the pregnant woman who is going through a lot. Right from the walk, to the painful expressions of a pregnant lady, Anasuya has just killed it in her role. Once again, she proves what a good actress she is with this film which showcases her in a new avatar

Though this is not a drawback, the story of Abhi is showcased so much in detail which was not at all necessary. The director gives more screentime for Abhi’s story and does now showcase Anasuya and her problems much.

Because of this, the film becomes dull as routine scenes are showcased. More time and scenes should have been added to Anasuya’s story which looks abrupt as not many scenes related to her past are showcased.

The actual story of the main leads getting stuck in a lift start only after the breakpoint. Also, there are a few logics that go for a toss. Hero makes calls to everyone and the issue is even showcased in media. But during all this, the cops do not come, and nor the hero tries to call them. This looks a bit weird.

Special mention should go to the camera team as they showcase Hyderabad in a new way. The production design, artwork, and visuals are rich and top class. BGM is also neat. Dialogues are good and so was the basic theme of the film. Editing is okay but a few party-related scenes of hero should have been chopped off.

Coming to the director Ramesh, he has done a decent job with the film. His story idea is good and execution is also perfect in the second half. Had he made the first half a bit more crisp and emotional, things would have been quite good.

On the whole, Thank You Brother, is a decent attempt by director Ramesh Raparthi. The film has decent thrills, realistic emotions, and a solid performance by Anasuya in the second half. If you manage to sit through the routine first half, this OTT film will surely end as a passable watch this weekend.