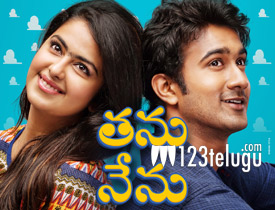 The teasers and promotions of Tanu Nenu created a decent buzz for the film. Starring debutante Santosh Shoban and Avika Gor, this film has hit the screens today. Let’s see how it is.

Kiran(Santosh Shobhan) is a call center employee who hates America and NRI culture. One fine day, he comes across Keerthi(Avika Gor) and falls in love with her. As time passes by, even Keerthi approves his love and the couple spend some happy times together.

On the other hand, Keerthi’s father(Ravi Babu) is a shrewd man who only dreams of sending his daughter to the US for big bucks. Twist in the tale arises when he decides to get his daughter married to an NRI.

What will Kiran do now ? How will he stop Keerthi from leaving to the US ? Why does Kiran hate America ? To know answers to these questions, you need to watch the film on the big screen.

Santosh Shobhan impresses with his debut film. The young actor showcases good emotions and is also good in the comedy department. His dialogue delivery is neat and if planned well, he can go a long way in his career.

Avika Gor is also good in the film. Her chemistry with Santosh is decent as the pair look quite convincing on screen. First half of the film is quite breezy with an interesting interval point.

The way friendship between youngsters and NRI relationships have been showcased needs a special mention. Even though Ravi Babu is good, his role was short lived.

One of the biggest drawbacks of the film was the lack of emotions during the second half. After wrapping up the first half with quite an interesting interval bang, the director lets go off the proceedings in a silly way.

There are certain scenes and situations during the second half which are a huge let down. Also, the way Ravi Babu’s character is ended and the emotions showcased post that incident lack maturity.

Entertainment value is slightly less during the second part. Tanu Nenu will appeal only to the youth and multiplexes.

Music by Sunny M R is decent and so was his background score. Dialogues written and the satires executed on the NRI culture have been written well. Screenplay is decent during the first half but slightly falters during the second part. Production values of the film are pretty good. Even though the film is made on quite a small budget, the camera and art work make the film look quite rich.

Coming to the director Ram Mohan, he has done a pretty decent job for his debut film. He chooses a novel story line and nicely sets it up in today’s age and situations. Ram even manages to showcase a decent love story and extracts good performances from his start cast. But the only place where he fails is through the second half which is quite mediocre. Had he taken good care about this part, the outcome would have been even better.

On the whole, Tanu Nenu is a quirky love story which will appeal to the youth and multiplex audience mostly. The simple and clean content of the film and impressive performances by the lead pair are some assets. Having said that, the film is let down a bit because of a mediocre second half and ends up just an ok watch this weekend.