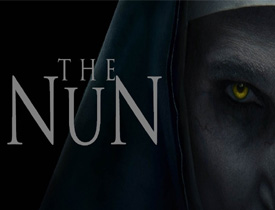 The highly anticipated outing from the conjuring universe, The Nun released today amidst sky-high expectations. The horror drama holds the key to the inception of Conjuring which was more than enough to excite the followers of this franchise. Scroll down to check whether the movie lives up to the expectations or not.

Following the orders from the Vatican city, Father Burke(Demian Bichir) and Sister Irene(Taissa Farmiga) enter an abbey in Romania to find out the reason behind the suspicious death of a nun. In this process, they come to know that the abbey is one of the most haunted places on earth, or maybe even in this universe.

But to their bad luck, Father Burke and Sister Irene are left helpless in this unholy place and need to cease the evil spirit, Valak, which has been trying to enter the open world. Will they be successful in this process? Will Valak bow down to mere human power? These questions are answered on the big screen.

The movie starts off on an exhilarating note as we see incidents that form the core plot of the Conjuring universe. During the opening sequences, somewhere in the Romanian abbey, we see a door bearing a transcript that reads “God ends here”. This particular scene sends jitters down the spines of the viewers.

Taissa Farmiga is a big plus as she manages to emulate key emotions that add a whole lot of intensity to the proceedings. Also, the supporting cast played their part well and bring an authentic vibe to what we see on screen.

The pre-climax episode, which forms the crux of the movie offers a few thrills to the viewers. The background score that runs during these sequences gives an apprehensive feel.

Despite the fact that the movie has a crisp runtime, one may feel that the second half is a bit too long. A couple of horror scenes in which the ghost appears from nowhere have been simply forced into the movie just for the sake of intimidating the audience.

The resurrection plot of the evil spirit is not so convincing and the viewer can easily outsmart the storyteller. In addition, novelty takes a backseat at the beginning of the second half as unnecessary subplots take the center stage and that damages the flow of the movie.

The Nun banks solely on the unholy spirit, Valak, which gave sleepless nights to the followers of the Conjuring universe. But the spine-chilling factor goes missing here owing to the loopholes in the narrative.

The director, Corin Hardy managed to induce a few scary moments here and there but his overall output falls short of expectations. He does not make full use of Valak which is probably the most dreadful creature in the Conjuring universe.

James Wan, who directed the Conjuring provided the story for this movie and it needs to be said that fans expected more from him. Conjuring was laced with horror content that had novelty and conviction but that is not the case with The Nun.

The camera works are simply brilliant as the Romanian abbey has been captured in a great manner. The dark color grading has been portrayed brilliantly and the cinematographer, Maxime Alexandre deserves a special mention here.

On the whole, The Nun has a few scary moments here and there but falls short of expectations as it lacks cinematic novelty. On the bright side, we get to see what really happened before the Conjuring and the events that led to the birth of the renowned horror franchise. However, the below-par plot fails to bring the best out of Valak and that will surely disappoint a major section of the viewers. You can give this movie a shot if all you want is a horror drama that offers a few thrills. But keep your expectations in check.