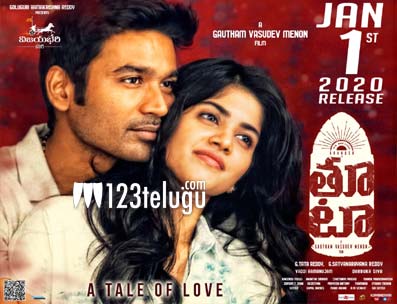 Dhanush’s long-delayed film Thoota has finally found its release date. Directed by Gautam Menen, this film has hit the screens today. Let’s see how it is.

Raghu,(Dhanush) a Btech student falls in love with Lekha(Megha Akash) who comes to his college for her film’s shoot. On the other hand, Lekha is an orphan who is being taken care of by her wicked uncle Setu Veera Swamy. After a point, Lekha runs away with Raghu and starts living happily. This does not go well with Veera Swamy and he causes a right between the couple and separates them. After four years, Lekha is found in Mumbai and is saved by Raghu’s brother Guru(Saisi Kumar). Why is Lekha in Mumbai? Why did Guru save her? What is the whole connection? That forms the rest of the story.

One of the biggest assets of the film is the sizzling chemistry between Dhanush and Megha Akash. They look amazing as a couple and act superbly in all the romantic and emotional scenes. Gautam Menon showcases Dhanush is a superb manner. He is stylish, brave and cool in all the action sequences and carries the entire film on his shoulders.

Sunaina, who played Dhanush’s friend in the film also did a good job in her role. Sasi Kumar in the role of Dhanush’s brother was very impressive. There are a few action episodes in true Gautam Menon style which has been composed quite well. The two songs that come in the second half are superb and have also been shot superbly. Megha Akash was also neat in her role.

Sasi Kumar’s role is diluted in the second half as there is no prominence to his character. The second half goes for a toss as even Gautam Menen did not understand how to handle the story and left it in between.

There are a few logics which go missing in the film. The heroine falls for hero in just one scene and the way this scene is canned, looks a bit over the top. Also, the manner in which things happen so easily in Mumbai once the film shifts there is also over the top.

For the first time, Gautam Menen’s story is very weak and does not have anything interesting. His screenplay is also dull and does not give you the vibe which is generally associated with all his films. There is no connection between the love story and Dhanush’s brother and this looks odd.

Music is superb as all the songs have been composed and shot well. The BGM is also very good and elevates the ordinary story quite well. Editing is decent and so was the production design. The Telugu dubbing is pretty impressive. Lyrics are quite good and the camera work was stunning. Coming to the director Gautam Menon, the film does not have his touch at all and that is the reason the entire second half goes for a toss and is hurried in the climax as well.

On the whole, Thoota is one of those few Gautam Menon films which does not work at the box office. The routine story, logical errors and second half go for a toss. Except for some sizzling chemistry between the lead pair and good songs, this film has nothing much interesting going its way and can be watched when it comes to the digital platform.