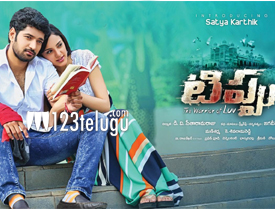 Continuing with the trend of low budget flicks, yet another action entertainer titled Tippu has hit the screens today. Let’s see how it is.

Satya(Satya Krishna) is a college going youth who falls in love with Vaishnavi (Kanika Kapoor). He joins her college and woos her to accept his love. This is also the time when a dreaded gangster called Keshu Bhai(Shravan) lays his eyes on Vaishnavi.

Things go out of hand as Keshu Bhai starts torturing Vaishnavi big time. An angry Satya suddenly takes things in hand and kills off Keshu Bhai. Why did Satya kill Keshu Bhai ? Is there a personal motive behind the killing ? Will the police nab Satya ? To know answers to these questions, you need to watch the film on the big screen.

Debutante Satya Krishna is pretty decent for his first film. He has good screen presence and is also impressive with his fights and dances. Satya had an author backed role which he performed to the best of his capabilities.

First half of the film is good and has some interesting moments. Posani’s comedy track and some good songs make up for a decent first half. M S Narayana’s comedy brings some relief here and there. Shravan is good in his role of a bad guy. Sana looks young in a chirpy role.

After a decent first half, Tippu goes down slide. The premise becomes so silly as a number of unnecessary characters and scenes take center stage. Even though M S Narayana’s track with Sana is good, it is dragged out a bit.

Krishna Bhagwan’s entry and the whole Ashram episode cause irritation. There is no importance to the villain’s role during the second half. After showcasing him in such a powerful role, the makers have diluted the plot with unwanted commercial elements.

Narration lacks focus and climax is just hurried on to us. There is no depth in emotions during the second half as the movie becomes routine. Heroine Kanika Kapoor looks out of shape and is wasted in the film.

Mani Sharma’s music is the only respite in the technical department. All the songs sound good and have also been shot well. Production values are decent and present the Mysore area well. Screenplay is pathetic during the second half as the makers have invoked unnecessary comedy tracks.

Editing is ok and so is the background score. Coming to the director Jagadish, he has done a decent job with the first half but spoils the entire second half with a lack luster narration. He dilutes the plot and makes the film go off track.

On the whole, Tippu is a good script with pretty bad execution. After an interesting first half, the film had all the trappings to become a decent watch but is spoiled completely by some shoddy narration and forced commercial elements. The only positive outcome of this film is the hero Satya Krishna who is pretty decent for his debut film. You can safely ignore this film and watch it when it comes on tv.