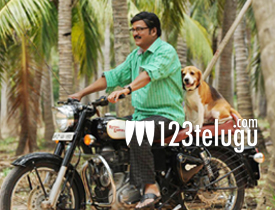 Remaking Hollywood films is nothing new for Indian film makers. The cult hit Hachiko-A Dog’s tale has been now been remade in Telugu as ‘Tommy’. Starring comedy king Rajendra Prasad in the lead role, this film has hit the screens today. Let’s see how it is.

Satyam Master(Rajendra Prasad) is a very famous professor in Bheemavaram. One find day, he comes across a dog in the railway station and decides to adopt it. Initially, his wife(Seetha) does not approve of it but later agrees to her husband’s wish.

The couple name the dog Tommy and very soon, the pet becomes a key member of the family. Twist in the tale arises when an untoward incident changes the entire family’s life upside down. What is that incident ? What problems does it cause to the family ? and what happens to the dog finally ? To know answers to these questions, you need to watch the film on the big screen.

Major plus point of the film is the dog Tommy. The way the dog has been trained to perform in the film is superb. All the scenes featuring the dog and Rajendra Prasad are quite emotional and have been executed well.

Rajendra Prasad is perfect in his role and does a superb job. He holds the film together and brings in a lot of depth to an interesting story. Seetha is ok in the role of his wife and so is L B Sriram. First half of the film is good and has decent family moments. Kids will especially like the dog and its role.

After showcasing a beautiful relationship between the dog and its owner, the makers mix up the second half and end the film in a hurry. There was a lot of scope for a emotional drama which is missed by the director completely. There could have been enough scenes that showcase the pain and grief in the family.

After a point during the second half, the film loses its direction and makes up for a predictable ending. They are few scenes which could have been totally avoided. The romantic song between Rajendra Prasad and Seetha is completely out of place and looks vulgar. The Hollywood original had a lot of heart touching moments which are missing in this film badly.

The way the film is set up in a small town looks natural. Camerawork is good and showcases the rural locales beautifully. Screenplay of the film is decent but gets bogged down in the second half. Director Raja Vannem Reddy picks a good subject and also manages to showcase it convincingly till the first half. But he misses out on the emotional thread which is key to the film and ends the film abruptly.

On the whole, Tommy has an interesting premise and beautiful content. First half of the film is decent and holds the viewers attention. But it is the second half which misses out on the emotions and makes this film just an ok watch. Children and animal lovers may like it.