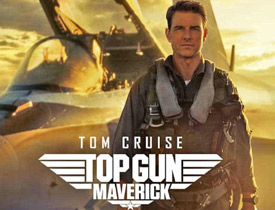 Tom Cruise-starrer Top Gun-Maverick, a sequel to Top Gun (1986), hit the screens worldwide today. Check out how the film is.

With more than 30 years of experience as the Navy’s top aviator, Pete Maverick (Tom Cruise) Mitchell intentionally dodges promotions to be at the place where he belongs. One day, he gets a call from his friend and former rival, Tom Iceman Kazansky (Val Kilmer), the commander of the U.S. Pacific Fleet, to train an elite group of ‘Top Gun’ graduates. His job is to train them, including Bradley Rooster Bradshaw (Miles Teller), the son of his late best friend, to destroy a Uranium facility. How does Maverick train them? Do they destroy the facility? What happens between Maverick and Rooster? All these answers will be answered in the main movie.

The story of Top Gun: Maverick is so simple and clear. But, what makes it interesting is the engaging screenplay and stellar performances from the lead actors, especially Tom Cruise. He looks terrific and handsome in the movie. His subtle performance, especially in the scenes with Rooster (Miles Teller) and Penny (Jennifer Connelly) is worth mentioning.

The way Tom Cruise prepares the ‘Top Gun’ members to work together and come back safely is one of the best parts of the movie. Moreover, the climax gives a nail-biting experience to the audience for sure. The combat scenes, especially the airborne dogfights will make the audience feel the thrill. Apart from Tom, the rest of the cast also did justice to their roles.

Top Gun: Maverick has a simple story with not many twists and turns. This is a big disappointment to Tom Cruise’s fans who used to watch him in out and out action movies like the Mission Impossible franchise.

On the other hand, the inclusion of backstory related to his best friend and Radar Intercept Officer Lt. Nick Goose Bradshaw from the prequel could have helped the movie a bit to connect well. Scenes between Tom Cruise and Miles Teller would have been better.

The first thing to mention is the direction of Joseph Kosinski, well known for Tron: Legacy. He makes the movie worth watching by considering and including all the elements one expected from a Tom Cruise’s film. Screenplay by Ehren Kruger, Eric Warren Singer and Christopher McQuarrie is racy.

Cinematography by Claudio Miranda is one of the best things which gives the audience a wonderful experience throughout the movie. Claudio Miranda’s work is phenomenal, especially in the airborne dogfights. Besides, music is one of the biggest assets of this action drama, which also has crisp editing by Eddie Hamilton.

On the whole, Top Gun: Maverick is a good action drama which is better than its prequel. The audience can happily enjoy it even if they didn’t watch the first part. Tom Cruise’s phenomenal performance and action sequences make the movie worth watching. Give it a watch if you love action dramas.