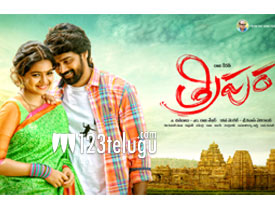 After the huge success of Geetanjali, director Raaja Kiran is back with yet another suspense thriller Tripura. Starring the bubbly actress Swathi and Naveen Chandra, this film has hit the screens today. Let’s see how the film turns out to be.

Tripura(Swathi) is a typical village belle who gets weird dreams which turn out to be true in real life. Seeing Tripura’s medical condition, her dad consults a psychiatrist (Naveen Chandra) in Hyderabad. During her treatment in the city, Tripura falls in love with Naveen and eventually marries him with the consent of her parents.

As time passes by, Tripura continues to get these dreams, until one day where she sees herself killing Naveen with a knife. What will Tripura do now ? Will her dreaded come true ? Will she really kill her husband in real life too ? That forms the rest of the story.

Swathi is undoubtedly the major attraction of Tripura. She sheds her girl next door image and carries a serious role confidentially. She is exceptionally good in the emotional scenes and portrays superb expressions as a confused house wife.

Naveen Chandra is decent and performs well in a key role. The young actor is very good during the climax and brings a lot of depth to the film. First half of the film and the various comedy elements during this time have been executed well.

Sapthagiri is impressive with his comedy and manages to evoke decent laughs. Climax is quite engaging and the way all the twists are revealed is also good. Rao Ramesh is apt as the senior doctor.

Even though the suspense factor is maintained till the end, the proceedings are stretched too much. There was absolutely no need of dragging the film for so long. The makers tried to add certain commercial elements and introduced Shakalaka Shankar and Jaya Prakash Reddy for comic relief. The comedy episode which comes during this time is routine and spoils the flow of the film.

Run time of the film is also a problem and a song in the second half makes matters difficult. The story has a simple point and the complex screenplay makes proceedings go on and on.

Much clarity was not given about Swathi’s dreams and the episodes which showcase them needed more depth. All those who feel that Tripura is a horror film will be disappointed.

Camera work is very good and showcases the locations supremely well. Dialogues written are decent and so was the background score. Music of the film is below par and a romantic song in the second half could have been easily edited. The makers should have made the film even more crisp as suspense thrillers find it very hard to sustain that long.

Screenplay by Kona Venkat is pretty average. He adds way too many scenes and deviates from the topic. Coming to the director Raaja Kiran, he had a decent story with good suspense. He even starts the film well and also ends it quite engagingly. But midway through, he goes a bit haywire and loses focus on the script.

On the the whole, Tripura has some interesting moments here and there. Swathi’s performance, the concept and climax are basis assets. But it is the narration which drags the film way too long and spoils the gripping concept. All those who like suspense thrillers will end up liking it but for the rest it is just an below average affair and can watch this film if they have nothing else to do.