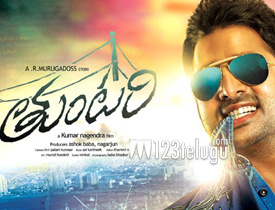 Nara Rohit’s Tuntari, has been creating a lot of buzz from the past few weeks. After a huge round of promotions, the Kumar Nagendra directorial has finally hit the screens today. Let’s see how it is.

A group of corporate employees go on a vacation to a beautiful hill station. There, they come across a holy saint who presents them a news paper which is four months in advance from that date. Upon reading the paper, the group find out that they along with a guy named Raju(Nara Rohit) win a boxing competition which is worth five crores.

Elated with this, they start searching for Raju and finally nab him in Vizag. On the other hand, Raju is a carefree guy who is jobless and spends his life without any aim. Rest of the story is as to how this group convince Raju to learn boxing and win the prestigious competition.

Story of the film is quite novel and new for Tollywood audience. The fantasy element is interlinked well with the real life and makes up for an engaging story line. Talented actor Nara Rohit, impresses well in his entertaining role of a careless youth. The way he uses his body languages and evokes good fun through out the film is the major highlight of Tuntari.

Vennela Kishore and Shakalaka Shankar do their jobs well. First half of the film is good with ample entertainment. Latha Hegde makes an ok debut and does her role well.

Even though main villain, Kabir Singh has nothing much to do in the film, he is impressive during the last ten minutes. Last twenty minutes elevates the proceedings quite well and the climax fight is neatly executed. Ali is ok in his role of a referee and brings in few laughs.

One of the biggest minus points of the film are the songs. In a two hour four minute movie, there are five songs which disturb the flow of the film and especially during the second half. Second half is a major drawback and moves on without much aim till the film reaches the climax.

There is absolutely no chemistry between the lead pair because of which the purpose of the film takes a beating during the second half. Even though the boxing competition evokes fun, certain fights have been stretched too far and look silly.

Music and background score by Sai Karthik is pretty good. Camera work is decent and showcases Vizag and its surrounding areal well. Editing is jaded as at least three songs could have been chopped off. Dialogues are funny and have been written well. Production values are decent and so was the art direction.

Coming to the director Kumar Nagendra, he has done an ok job with the remake. He executes the first half well and narrates the film with ample comedy. Even though he rushes things a bit in the second half, he nicely balances it during the climax and makes use of the limited resources pretty well.

For the first time, Nara Rohit chooses an entertaining role and manages to impress supremely well. His comical performance and carefree attitude evokes good fun during the first half which is the basic asset of Tuntari. But a slightly mediocre second half and too many songs take away the freshness making this film an ok watch this weekend.