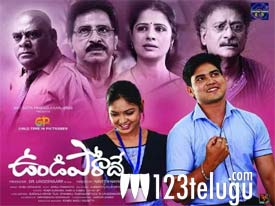 One more low budget film which has made its way to the theaters is Undiporade. Based on a father-daughter relationship, lets now see how the film turns out to be.

The film is based in Rajahmundry. Kedar Shankar raises his daughter Harshita with a lot of care and affection. As time passes by, he sends his daughter to Hyderabad for further studies. There, she falls in love with a young guy called Ram(Tarun Tej). But as in all films, this does not go well with heroine’s father. Rest of the story is as to how the couple successfully gets united with the blessings of the girl’s father.

One of the biggest assets of the film is the father-daughter relationship. All the episodes which showcase this bond have been elevated well in the film. Kedar as the possessive father does a superb job in his role. Even the female lead, Lavanya does a good job in her role and is efficient in all the emotional scenes with her father.

Patas fame Nookaraju does a good job in his role and evokes decent comedy here and there. Ajay Ghosh is yet another highlight in the film as he does his role quite sincerely. The love scenes between Ram and Lavanya have been showcased well and look realistic. The way parents go through all sorts of trouble when their young kids fall in love has been executed well.

The love track does not create much impact to the proceedings even though it has been shown well. There are many scenes which defy the logic in the film and sidetrack the proceedings completely in both the halves. The climax is also not that convincing and ends on a very familiar note which will be boring for the audience.

The background score composed by Yalender is quite impressive and evokes good emotions. Production values of the film are neat as the film does not look odd in any way thanks to some good camerawork. The story of the film is ages old and does not showcase anything new. Coming to the director Naveen, he chose a simple subject and has written the father-daughter episodes well but the rest of the film goes for a toss. Editing is just about okay and so were the lyrics.

On the whole, Undiporade is an age-old family drama which does not have anything interesting going it’s way. Except for some emotional scenes between the father and daughter, this film has no novelty, good conflict point, and racy proceedings. Ignore it this weekend and watch it when it comes on TV.