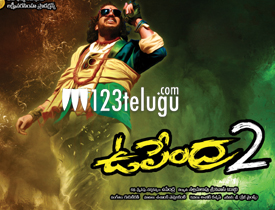 Kannada star Upendra, has a huge following in Tollywood. After a long gap, he is back with the sequel of his hit film Upendra. Titled Upendra 2, this film has hit the screens today. Let’s see how it is.

The movie kicks off from where the first part Upendra ended. Every one is looking out for Nenu(Upendra) who re-surfaces in a remote village with a new name Nuvvu. His crazy philosophies and life style attracts a press reporter named Lakshmi( Kristina Akheeva) big time and she decides to marry him at any cost.

Twist in the tale arises when Lakshmi comes to know a unique story behind Nuvvu which is indirectly related to her property. What is that story ? Who is this Nuvvu ? and What he is up ? To know answers to all these questions, you need to watch the film on the big screen.

Major plus point of the film is none other than Upendra himself. As expected, the super star surprises you with his unique get ups and unconventional approach. He is specially good during the first half and holds the film together.

Heroine Kristina Akheeva is decent in her role and manages to draw some attention in all the chaotic situations. Certain philosophies which are showcased through Upendra’s character in the first half have been dealt well.

Upendra 2 is one of the most confusing films in the recent times. It is very hard to track as to what is going on in the film and one has have special capabilities to understand Upendra’s logics and approach towards life.

Even though viewers go in with an assumption that the film would have some bold dialogues and scenes, sadly, there is nothing of that sort in the film. Climax is super confusing and is ended on a very unclear note.

Upendra’s get ups and motto of the film never get carried through to the audience. At one point of time, you start seriously wondering as to what exactly is going on in the film. The film loses pace, clarity and to top it all it has no meaning.

Camera work is decent and showcases the film pretty well. Production values are good and all the locations chosen look superb. Music by Guru Kiran is just about ok but his background score is pretty good. Dialogues are in true Upendra style and are hard hitting. Coming to Upendra’s direction, he lacks focus this time around and narrates the film in a very silly manner. Screenplay is the biggest drawback as the proceedings in the second half test your patience to another level.

On the whole, Upendra 2 is one the most confusing and off beat film in the recent past. Not once during the film, the proceedings flow with a direction and irritate the audience bit time. Other than Upendra’s histrionics, this film will test your patience to another level. If you are curious enough and still want to go ahead and see what Upendra is up to in this crazy caper, watch it at your own risk.