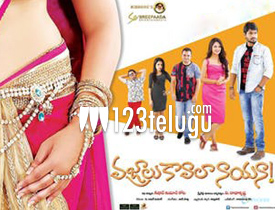 Continuing the trend of low-budget films, yet another comedy thriller which has hit the screens today is Vajralu Kavala Nayana. Directed by P Radha Krishna, let’s see how this film turns out to be.

The story of the film is set between five close friends who come to the city to make it big in life. But to their bad luck, things do not work out for them. Left with no choice, they decide to make quick money by robbing a house in their area which is rumored to have some costly ornaments belonging to the royal dynasty. What kind of plan do they make for this robbery? and will they be successful in life by doing such wrong things? That forms the rest of the story.

Some comedy scenes featuring the entire group have come out quite well. Especially the spoofs generated through the character of Narasimham works out well. Performance by Vijay Sai is very good in the film. Neha Deshpande’s flashback episode has come out nicely.

The way the film reaches the interval point through a very good and thrilling twist has been executed quite well. Some thrilling and horror scenes in the second half are decent. Especially the background score given during this time lifts the film in a decent way.

One of the biggest drawbacks of the film is the performance by the supporting cast. Except for Vijay Sai’s efforts, none of them click one bit. There is absolutely no chemistry between the lead pair. Except for the interval bang, the film does not impress whatsoever throughout.

Some scenes which showcase the bond between the five friends irritates you to the core. Some horror scenes showcased during the second half are quite repetitive. There is no proper flow in the storyline as the film wanders here and there all the time. The songs also come as huge speed breakers for the film.

Background score by Shiva Prasad is quite good but the music composed by John Potla is below average. Camerawork by Amar Kumar is just about okay and so is the editing by Rama Rao. Production values are quite good and so was the art direction. Coming to the director Radha Krishna, even though he chose an interesting genre, the way he has narrated the film without any proper flow and lack of emotions is very disappointing.

On the whole, Vajralu Kavala Nayana is yet another boring comedy thriller who goes haywire because of the lack- luster narration. Except for the interesting interval bang and some thrills during the second half, this film has absolutely nothing much to offer and can be watched when it comes on TV.