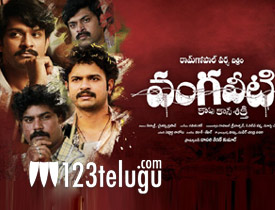 RGV’s much-awaited project, Vangaveeti has hit the screens finally. Based on the gang wars in Vijayawada, this film has Sandy and Vamsi Krishna in important roles. Let’s see how the film turns out to be.

The story is set amidst two famous rival groups of Vanagveeti and Devineni family in Vijayawada. Vangaveeti Radha(Sandy) is a small time rowdy who becomes huge in Vijayawada. As expected, his growth and popularity are hated by his rival group of Devineni family and they assassinate him with a perfect plan. Rest of the story is all about how the members of both the families end up killing each other.

One of the biggest assets of the film is undoubtedly the young actor Sandy. He is just astonishing and plays both his roles of Radha and Ranga with aplomb. Credit should go to RGV for showcasing him in a stunning way. Sandy is surely one actor to watch out for in the future and Varma makes his role and characterization quite gripping.

The detailing of the brutal murders and the way they are sketched are planned are showcased in a stunning way. RGV plays his cards quite cleverly as he does not take any sides and showcases the film in a very politically correct manner. Interval bang and the assassination of Devineni Murali have been showcased in a superb way.

Happy days actor, Vamsi Krishna has also done a commendable job. His role has good importance and he too is a good addition to the film. All the artists chosen look apt for their roles and do a decent job. Special mention to the background score as it lifts the film completely.

The climax of the film is ended on a simple note. All those who do not know about the history of these gang wars in Vijayawada will find the film quite routine as the film has only a revenge drama of killing each other. The inclusion of NTR and the way his character decides things at the end might create some tension among certain groups.

The story of these groups has so much history that RGV has skipped some very important parts of it and only narrated the film in quite a straight forward manner. There is a lot of bloodshed in the film as the murders shown are very brutal and might not be liked by a major section of the audience.

As expected, the visuals of the film are top notch. The drone camera angles and the way the rustic locales of Vijayawada are shown is superb. Production values by Kiran Kumar are very impressive as the art department has done a great job of showcasing the proceedings during the 80’s in a good manner. Editing is sleek and so were the dialogues by Sirasri.

Coming to the director RGV, Vangaveeti is far better film than his previous duds as he narrates the film in a gripping manner for most parts. His screenplay during the murder scenes and the way he executes performance for his artists is very good. Taking wise, there is nothing new from RGV but it is the way with which he has chosen actors who look exactly similar to the original ones and made them enact is the best part fo the film. Also, his satirical voice-over throughout the film is very interesting.

Vangaveeti is surely RGV’s better films that have come out in the recent past. The film will be viewed from different perspectives as all those who knew the entire story will like it immensely. But for those, who do not know the back story can find this film as a routine revenge drama with some RGV mark. The film has a terrific buzz in Andhra Pradesh and will be watched quite heavily just for the curiosity factor. Finally, if you liked RGV’s Rakhta Charitra, you will also like Vangaveeti as it falls in the same category of the terrific gang war films which RGV showcases quite realistically.