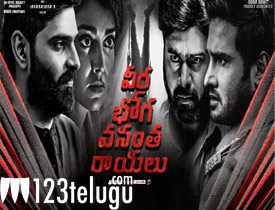 A lot has been said about Veera Bhoga Vasantha Rayulu from the past few months. After a unique round of promotions, the film has hit the screens all over today. Let’s see whether it lives up to all its hype or not.

Veera Bhoga Vasantha Rayulu deals with three different subplots which run parallelly. One is about a young boy’s missing home and the other plot deals with a missing plane which is carrying Indian cricketers. The last and the key plot is about a series of kidnapping which is happening in Hyderabad. What’s interesting is that all the stories are interlinked in some way or the other. What are all these cases? What is the link between them? and what roles do Deepak Reddy(Nara Rohit), Neelima (Shriya Saran), Vinay (Sudheer Babu) and Sree Vishnu play in this setup? To know the answers, you need to watch the film on the big screen.

Nara Rohit is good in his role of a tough investigative officer and all his scenes evoke decent interest. Sudheer Babu as SI Vinay got a good role and did his best in the film. Shriya Saran looks good and ably supports Nara Rohit.

Sree Vishnu goes for a complete makeover and tries something different in this film. Be it the looks or the way he went about the role, the young hero gave his best to the film.

The basic story idea of the film is decent but the way it has been executed is disappointing. The way the twist is revealed during the last fifteen minutes looks a bit interesting.

The film starts off on an interesting note but the excitement dies down immediately. There is too much of blood-shed in the film and the way it has been narrated looks out of place.

Sree Vishnu’s character looks over the top in certain areas and a lot of liberty is taken with his role which looks weird. The logic goes for a toss and the film starts looking silly and tests your patience in many areas.

Production values of the film are poor as the film looks like a B grade film in many areas. The three plots that have been written on paper look good but when they are executed on screen, things become silly and too hard to digest.

Music by Mark K Robinson is pretty disappointing but his background score was just about okay. As said earlier, the production values are horrible as short films made these days have better standards. Editing lacks the punch as many scenes in both the halves could have been edited out. The camerawork is neat in only certain areas. Dialogues are just about okay and the production design was bad.

Coming to the director Indrasena, he has done a horrible job with the film. Though his thought process is good, the way he has executed the film is totally disappointing. Not only his narration lacks the focus in many areas but he tests the patience of the audience with his illogical scenes.

On the whole, Veera Bhoga Vasantha Rayulu is a confusing mystery thriller which goes wrong in every which way. Though the major star cast tries hard to save the film with their performance, there is nothing interesting that the audience can look forward to. So, keep your expectations in check and watch it at your own risk.