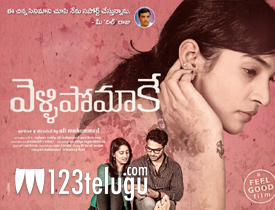 Continuing the trend of small films, yet another low budget film titled Vellipomakey released today. Impressed with the film’s content, top producer Dil Raju released this film. Let’s see how the film is.

Chandu (Vishwak Sen) works at an animation company. He is desperate to fall in love and share his feelings with his girl. After a few trials, he finally finds a girl (Swetha) during a Facebook chat and they both get close to each other in no time. The actual twist arises when Swetha deserts him without a prior intimation. Why did Swetha leave Chandu all of a sudden? What will happen to Chandu? You will have to watch the film on the silver screen to know his story.

The main concept of the film is good and director Ali Mohammad has dealt a delicate point well to an extent. Debutant Vishwak Sen is decent in his role and gives a good performance as an introvert. Heroine Swetha is okay on the looks front, but gives a decent performance in her limited screen time.

Though the concept of the film is good, the narrative runs on a single point which may not appeal to a larger section of audience. The entire first half only deals with hero’s introduction and it keeps on projecting his introvert character. The actual story begins only in the second half. However, lack of depth in the emotions ends up offering an experience of watching a short film. The conclusion of the film lacks clarity and looks abrupt.

Director Ali Mohammad’s idea of making a film on a delicate point is quite novel. He tries to showcase sensitive issues in an introvert’s love story. The songs penned by upcoming lyricist Sri Sai are good. Cinematography by Vidyasagar and Akhilesh is okay. Music by Prashant Vihari is decent. Production values for this low budget film are good. Lastly, Dil Raju should be appreciated for encouraging this small film and help it see the light of day.

On the whole, Vellipomakey is a film that is made with content that’s suitable for short films. Though the concept of the film is good, pale narration and the abrupt ending may not appeal to the audience. The emotions showcased in the film will also disappoint the audience and make Vellipomakey a below average watch this weekend.