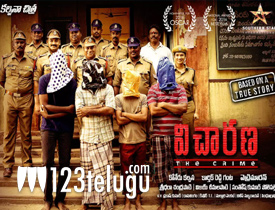 National award-winning Tamil film, Visaaranai is dubbed in Telugu as Vicharana. Directed by Vetrimaaran, the film’s Telugu version has hit the screens today. Let’s check how it is.

Four friends, who migrate to Tamil Nadu for their livelihood get arrested by Chennai cops in a false criminal case. The cops torture them to accept the crime and take them to Court. This is the time when an Andhra cop Krishna Murthy(Samuthirakani) bails them out of the case. As a return gift, Krishna Murthy enrolls four friends to kidnap an auditor.

After coming to Andhra, the four friends overhear the plan of Andhra police regarding a high -profile illegal case which is handled by the auditor. What happens next? What will cops do to shut the mouths of these guys? How will the lives of these innocent guys get affected? To know this, you have to catch the film in the theaters near you.

One of the major plus points of the film is its realistic narration without any unwanted deviation. After ten minutes into the film, the pace picks up with an engaging narration.

Four guys, who are seen in the lead roles did their job perfectly and brought depth to the proceedings. Noted actor Ajay Ghosh as a wicked-minded cop is impressive.

Tamil director turned actor Samuthirakani is the show stealer as his acting and screen presence stands out. The dark side of Policing system is exposed by interserting true events in the storyline.

As the film is based on a true event, lack of racy screenplay in the second half makes things dull. Moreover, the film’s slow-paced proceedings at times may find a bit tough for the audience.

Heroine Anandhi is not utilized as her suffering and chemistry with Pandu’s character is not established in a proper manner. Definitely, the film is not for all sections of the audience as it lacks regular commercial elements and runs on a serious note.

Director Vetrimaaran should be appreciated for coming up with a film which is based on true events. He succeeded to an extent in narrating the proceedings on a decent note but if he would have written a better screenplay in the latter half, things would have been even engaging.

Editing by Kishore Te and co-editing by G. B. Venkatesh is decent as the film is strictly to the point. Cinematography by S. Ramalingam is good as he used nice color texture to elevate the film’s mood.

On the whole, Vicharana is a crime drama based on true events. The film showcases the dark side of cops and how they deal with innocents. But lack of proper commercial elements and not so engaging narration in the second half may not go well with our Telugu audience. Those who like watching realistic crime films can give this film a try but others can ignore it.