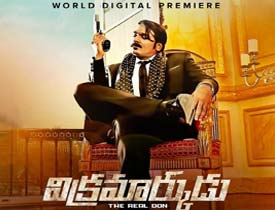 Vijay Sethupathi’s Tamil film Junga, which released back in 2018 is dubbed and released in Telugu now. The dubbed version is titled Vikramarkudu and here is our review of the film.

Junga (Vijay Sethupathi) works as a ticket collector in a local bus service. After coming to know that his father and grandfather were gangsters, he sets out on a journey to become a gangster himself. The challenges he faces in the process and the backstory behind his transformation form the remaining plot.

Vijay Sethupathi is one of the acclaimed actors in South Indian cinema and he excels as a witty bus conductor and also as an unconventional gangster. The comedy he generates with his comic timing is impeccable.

The second half is comparatively better than the opening half. The protagonist’s adventures in Paris underworld which take the centre stage in the latter half are partly engaging.

The problem with the Vijay Sethupathi starrer is that it doesn’t appeal to the Telugu audiences. It has too much Tamil flavour which doesn’t suit the sensibilities of native viewers. The slapstick comedy turns monotonous beyond a point.

Scenes that should have been narrated on a serious note are presented in a comical manner and that takes a toll on the narrative. The conflict point is silly and so is the story surrounding it.

Telugu dubbing is okayish. But the dubbed songs and their lyrics are very poor. Moreover, the title has nothing to do with the theme of the film. Vikramarkudu has a powerful ring to it but this film is a comedy drama.

The story penned by the director Gokul has a hint of freshness but his comical approach plays spoilsport. The core conflict is way too silly. The dubbing work for the songs is of very poor quality. Cinematography is neat.

Vikramarkudu is a silly comedy drama powered by a fine performance from Vijay Sethupathi. The comedy works in parts but the slapstick turns monotonous after a point. The film has its share of bright moments here and there but as a whole, it doesn’t make for a compelling watch. You might give it a try if you have way too much time to spare.
123telugu.com Rating : 2.75/5