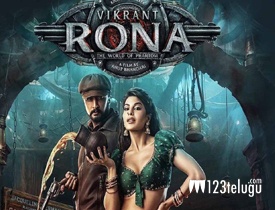 Kiccha Sudeep has been waiting for the release of his biggie Vikrant Rona for a very long time. The film has finally hit the screens today. Let’s see how it is.

Vikrant Rona is a period drama and is set in the ancient village called Komarattu in Karnataka. A cop gets killed mysteriously and in comes inspector Vikrant Rona(Sudeep) to handle the situation. Upon investigation, he finds out that sixteen other small kids have also been killed and these murders have a connection with his life. What is that connection? Who is the killer? and how did Vikrant Rona solve it? That forms the rest of the story.

One of the biggest assets of the film is the production values which are amazing. The setup and world created look quite intriguing and create a tense atmosphere for the viewer. The camerawork showcasing the forest visuals and arresting BGM is the backbone of the film.

Sudeep is one more major asset as his performance is stunning. He has mostly solo scenes and needs to carry the film on his shoulders and Sudeep did a fantastic job. He looks super fit and did great action during the climax.

Jacqueline Fernandez plays a cameo and she is cute in the Rakamma song. The story is set up quite well during the initial fifteen minutes of the movie. The climax and the way the killer is revealed are also executed quite well in the end.

The director has created a new world to narrate a suspense drama and the VFX also plays a major role and it looks superb. The supporting cast also did well in their respective roles. Nirup Bhandari gets a meaty role and does well.

One of the biggest drawbacks of the film is the excess length. The film needs to be trimmed for at least fifteen minutes straight and one song can be chopped off to make the viewing experience better.

Once the story is established quite well in the initial fifteen minutes, the proceedings go wayward. The love track and the way Sudeep investigates the case look confusing and bore the audience. Even the interval bang also does not create much impact.

The screenplay for suspense-based films needs to be gripping but that is not the case here. In key areas, it is very good but for the rest of the scenes, there is a lag created and sidelines the film after a while. There are some action blocks that were not needed at all.

As said earlier, the production values are top notch and one cannot make out the forest locations are indeed setwork. The BGM, props used, costumes, and visuals are arresting. The editing is bad but the screenplay was just about okay. Telugu dubbing was decent.

Coming to the director Anup Bhandari, he has done a passable job with the film. His story idea is simple but the world that he created to narrate the suspense drama is amazing.

His characterization, actors, and technical team do a great job. But Vikrant Rona falls short when it comes to a gripping screenplay. In order to confuse the audience more, the narration goes haywire and creates more confusion for the audience. If he would have edited fifteen minutes and told the story in a simple manner, the output would have been even great.

On the whole, Vikrant Rona is a suspense drama that has a great backdrop, solid performance by Sudeep, and amazing production values. The world created intrigues you but at the same time, the excess length and confusing screenplay sidetrack the attention of the audience. If you are okay with the above-said demerits, this film ends as a passable watch this weekend.