Review : Vinaya Vidheya Rama – Charan clicks but not the film 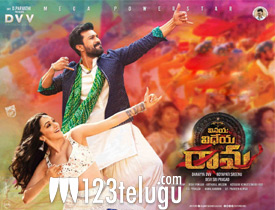 Boyapati Sreenu is a commercial cinema specialist and gives star heroes the needed image makeovers. He has now teamed up with Ram Charan for Vinaya Vidheya Rama which has hit the screens today. Let’s see how it is.

Ram(Charan) is an orphan who grows up with four other brothers who are also orphans. All of them spend some lovely times together and Ram keeps saving his family from evil people. But the twist in the tale arises when one of the brothers(Prashanth) who is an election officer gets into deep problems with a dreaded gangster called Raja Bhai(Vivek Oberoi). Rest of the story is as to how Ram guns down the villain and saves his family.

This is undoubtedly Ram Charan’s massiest role to date and Boyapati has showcased him in a good manner. Charan’s aggression, six pack body, and dances have been utilized in a decent manner and mega fans will love Charan in the film. The emotions between the family members have been showcased well in the first half.

Tamil hero Prashanth is impressive in his role and brings a depth to the film. Senior actress, Sneha also gets an emotional role and she does justice to her character. Kiara Advani looks beautiful but she is restricted to a few scenes in the first half and songs only. Aryan Rajesh and Ravi Varma are neat as Charan’s brothers.

Vivek Oberoi is yet another added attraction to the film and he has been showcased in a fiery manner in the second half. The elevation scenes to showcase the fights are pretty good and will please the masses. Especially, the Azerbaijan fight which showcases Charan’s six-pack look is good.

Yet another major drawback is the screenplay by Boyapati. There are many scenes in the film which are not clear. The manner in which Charan reveals facts about his brother, how the villains caused problems to him, and how it is set in the present time is not showcased clearly.

As expected, there are many logics which go for a toss in the film. The story of the film is nothing new and has been dealt with many a time before. As in every Boyapati film, there is an overdosage of violence and this will restrict the film in the overseas and multiplexes.

Though DSP’s music was not that great audio wise, the makers have done well to make the songs look good on screen. DSP’s background is also decent and elevates the fights in a superb manner. Dialogues are massy and the production values by Danayya are pretty impressive. Editing is crisp in the first half but looks out of place in the second. Special mention to the fights composed by Kanal Kannan as all the thrills are very good.

Coming to the director Boyapati, he has done what was expected of him. Though he did not showcase anything new, the manner in which he has used Charan’s charisma and screen presence was very good. Fans wanted to see Charan in an aggressive manner and Boyapati has done justice to this part quite well. He also starts the first half with good emotions, songs, and fights and sets the interval bang well. But his narration lacks the grip in the second half as logic goes for a toss and the film is edited abruptly and because of this, the ending is disappointing.

On the whole, Vinaya Vidheya Rama is a typical Boyapati film with his trademark elevation scenes and fights. The only difference here is that Charan is showcased in a new manner but the story and treatment remind you of the same old Boyapati films in the past. The film is clearly made for the masses and fans and will only please them. But for all those who look for something new and expect fresh taking and entertainment, the film ends up as a below-par watch. So, keep your expectations in check as you exactly know what is coming your way.