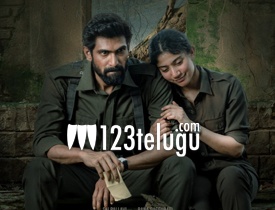 Virata Parvam is a film that has been in the making for quite some time now. The film starring Rana and Sai Pallavi has finally hit the screens today and let’s see how it is.

The story is set in the late 70s in Telangana when the Naxal movement was at its peak. Vennela(Sai Pallavi) belongs to a lower caste and is quite inspired by the revolutionary poetry written by a famous Naxalite Ravanna(Rana Daggubati). Without even meeting Ravanna, Vennela falls in love with him and leaves her home, and starts her journey to find Ravanna. After a crazy turnaround of events, she crosses paths with Ravanna. Will Ravanna accept her love? What problems did Vennela face in her journey? and what happened to her, in the end, is the whole story of the film.

Firstly, the makers need to be appreciated for producing a subject which is devoid of commercial aspects and is high on content. Though the Naxal backdrop has been showcased in many films, Virata Parvam has a love angle that has been induced in a very mature manner and this is where the film scores brownie points. The making, visuals, and BGM are major assets to the film which is gripping for the most part.

Rana is choosing his roles quite effectively and he as Ravanna is superb. He does not get to do much in the first half but comes to his own in the second part and is the major pillar of the film. Rana’s screen presence superbly suits the tone of the film.

Priyamani and Naveen Chandra are impressive in their respective roles. The atrocities faced by the people and how Naxals help them have been brought out quite well. The action sequences and suspense factors are maintained quite effectively. The climax is a special aspect and will leave you with a lump in your throat.

Last but not the least, Virata Parvam is Sai Pallavi’s show all the way. We all know what a solid performer she is but, in Virata Parvam, she takes her acting prowess to another level. The way she brings out her love for Ravanna, fights for her cause, and shows the emotional turmoil, to find him is brought out superbly by Sai Pallavi. As hero Venkatesh said in the pre-release event, Sai Pallavi has indeed given an award-winning performance.

Right from the first scene, Virata Parvam is a serious drama and is not for the ones who like commercial cinema. There is no entertainment or romance that will be showcased and one should be aware while watching this film.

The second half of the film goes down a bit. The tempo in the narrative slows down as some repeated scenes of the Naxal backdrop are showcased for no reason. After showcasing Sai Pallavi’s revolution and love, one would feel that the climax should have more drama. Though it is decent, more drama and detail would have made things quite effective drama-wise.

Virata Parvam is high on technical aspects. The camerawork by Dani Sanchez-Lopez and Divakar Mani is one of the best in recent times. The period backdrop, forest visuals, and action blocks are showcased superbly.

The manner in which the production design is executed is just amazing. The costume design and lyrics for the songs are amazing. Yet another major highlight is Suresh Bobbili’s music. His songs are superb and more gripping was his BGM which elevates the film to another level.

Coming to the director Venu Udugula, he has done a very good job with the film. His writing is sharp and has enough scope for the drama to be elevated. The way he has mixed love and revolution through Sai Pallavi’s character is very good. He has worked hard on each aspect and has extracted superb performances from his cast which is perfect. The sensibilities and ideologies of each character are brought out well and the way he ends the film is also emotional and proves his grip over drama.

On the whole, Virata Parvam is a revolutionary drama that has drama and emotions in the right quotient. The second half becomes a tad dull and predictable but the performance keeps you engaged. As the film’s genre is serious and revolutionary not everyone will connect to it right away. Barring this, Rana and Sai Pallavi make sure that Virata Parvam is worth a watch for its honest attempt and sensible narration.