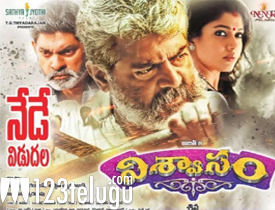 Viswasam turned out to be a big hit in Tamil and has now been dubbed in Telugu. The film was released today and let’s see whether it lives up to all the hype or not.

Veraraju(Ajith) is one of the village heads who carries great respect in Ravulapalem. He helps others all the time but is very upset with the fact that his wife(Nayanthara) has left him and gone to Mumbai. Seeing his situation, his relatives force him to go to Mumbai to bring his wife back. Upon meeting his wife, he comes to know that his daughter has a threat from some goons. Who are these people? Why did Veraraju leave his wife in the first place? Will the husband and wife get back together? To know the answers, you need to watch the film on the big screen.

Ajith is top class and once again proves what a versatile actor he can be. His role as an emotional father is the highlight of the film and Ajith leads from the front and gives a settled performance.

As always, Nayanthara is full of graces and does her role well. She looks beautiful and shares very good chemistry with Ajith. The scenes featuring Ajith and Nayanthara have been written and executed well. Jagapathi Babu is top class as the negative guy.

There are many unnecessary scenes which bog down the film to an extent. Especially the comedy generated sidetracks the film every now and then. The scenes between Ajith and Jagapathi Babu do not look that gripping and could have been better.

There are many family emotions in the second half which have been dragged to no extent. The emotional bond between the lead pair is not elevated well in the second half even though there was a good scope. The film has a heavy Tamil flavor and might not go well with the A center audience.

Production values of the film are top notch as a lot of money has been spent on the visuals. Editing is bad as many scenes in the second half could have been chopped off. The camerawork is top notch as the village visuals and festive atmosphere has been nicely showcased. Imma’s background score is top notch as it is full on massy.

Coming to the director Shiva, he has done just an okay job with the film. He nicely used Ajith’s mass appeal and showcased him in a superb way. But the needed family emotions and drama went missing in his narration throughout the second half.

On the whole, Viswasam is a film which banks heavily on Ajith’s stardom. The film was released during the festive season in Tamil Nadu and fulfilled the purpose of its release. But as the film has a heavy Tamil flavor and routine proceedings, only a section of the B and C centers in Telugu states might like it. So, watch the film at your own choice as the village drama has nothing that you have not seen before.