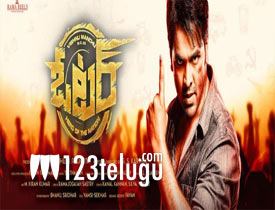 Voter has been in the making for quite some time now. The film starring Vishnu Manchu and Surabhi has hit the screens today. Let’s see how it is.

Gautam(Vishnu), who works in the US, comes back to India to cast his vote. In this process, he falls in love with Surabhi and proposes to her. Surabhi lays a condition to Gautam that if he fulfills a particular task related to a dreaded central minister, she will okay his love. What is that task? How will Gautam fulfill it? and what obstacles did he face in this process? That forms the rest of the story.

The concept of re-call election has been executed well in the film. The questions raised on several politicians in the country look novel and have been nicely executed by director Karthik Reddy. Some political scenes in the first half, Posani’s track and Vishnu speaking high about his country, all these episodes have been showcased well.

Vishnu is good in his role. His action sequence where he saves his sister has been done exceptionally well by the talented actor. Surabhi looks glamorous and provides good eye candy for the audience. Her chemistry with Vishnu was also good.

Sampath Raj is superb as the central minister and does well in his role. Posani is very good in his small role and evokes decent comedy.

Even though the concept of re-call election is good and is executed well in the first half, things get disappointing in the second half. They are dragged for no reason and bore the audience taking the second half down. Things become way too cinematic during this time.

The hero-villain conflict is not established well in the film. Scenes building up the re-call election do not create much impact. Rest of the commercial aspects like emotions, action and tragedy look a bit forced in the second half.

Coming to the director Karthik, his concept looks novel and he narrates the film well till the half point. But he loses grip in the second half as everything looks forced and do not generate much effect.

On the whole, Voter is a political drama which has a good concept but wayward narration. The scenes related to the political setup are good in the first half but things get bogged down in the second half as forced emotions, lack of connectivity factor and routine proceedings make things go haywire. All those who like political dramas can give this film a shot but the rest can ignore the film and look for something else this weekend.