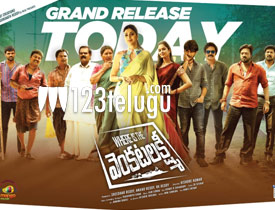 Lakshmi Rai’s Where is the Venkatalakshmi has been promoted quite well all over and has finally hit the screens today. Let’s see how it is.

Chanti Gadu(Praveen) and Pandu Gadu(Madhu) are two sibling roadside Romeo’s who create a lot of trouble in their village. One fine day, a teacher in the form of Gauri(Lakshmi Rai) comes to their village. Attracted by her, both the brothers try to woo her. But to their shock, they find out that Gauri is a ghost and is after a box which she orders both the brothers to somehow bring from the goons. Rest of the story is as to how Chanti Gadu and Pandu Gadu mange this tricky situation and save their lives.

This film is a big career move for both comedians Madhu and Praveen. They are the main key to the film and give a very good performance. Praveen was very good with his Godavari slang and emoted quite well in all the comedy scenes. Madhu was also equally good and showcased that he can carry a lengthy role with ease.

Lakshmi Rai looks glamorous and does what is needed of her. But she has not been utilized well in the film as her role is subdued in the second half. Some situational comedy featuring the village set up is good in both the halves.

Heroine Poojita Ponnada is superb in the film. She showcases both her native village girl looks and glamorous side equally well in the film. Performance wise, she is quite good as well. Annapurna was okay in a few scenes. The first half has decent emotion and fun which is generated through Madhu and Praveen’s characters.

One of the basic drawbacks of the film is that there is no seriousness in the proceedings. The director has written the plot well buy has not executed it in a proper manner. After a few good scenes, situation becomes over the top as the director unravels boring and outdated comedy.

The actor who did the role of the main villain is not at all strong as his weak screen presence and performance do not add any value to the film in the second half. The makers had a lot of scope for improvisation in the second half but they spoilt the film with silly twists and bad songs.

Also, the manner in which the climax is handled is not at all good. The major twist of Lakshmi Rai and her actual background is revealed in just one weak scene. The brothers going to the goon’s house for a box, making a fool of themselves, such scenes have been showcased in many films before.

Production values of the film are top notch as the makers have spent well in getting the village set up right. Impressive camerawork makes the visuals look rustic and simple.

Music of the film is pretty decent as two songs which come in the first half are good. BGM was quite routine. The production design and the manner in which Lakshmi Rai was designed looked good. Editing was weak in the second half.

Coming to the director Kishore Kumar, his idea of generating a horror comedy was good but he did not utilize the script to a proper extent. There was a lot of scope for horror in the film but he did not use it at all. Also, he makes the second half so boring that you get irritated many a time. Not one proper episode works during this time.

On the whole, Where is the Venkatalakshmi is a good script gone wrong kind of a film. Lakshmi Rai, comedians Madhu and Praveen try to save the film with their sincere efforts but the second half has nothing going it’s way and kills the interest of the audience. The film might find some takers in the B and C Centers because of Lakshmi Rai but for others this movie ends as a below par watch.