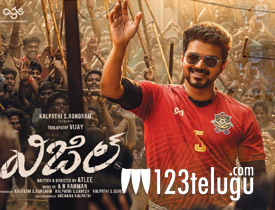 Whistle is a film that has been awaited for a long time even in the Telugu circles. The sports drama has finally hit the screens today. Let’s see how it is.

Michel(Vijay) is the local messiah of the masses and often helps the poor. He has many enemies and who keep targeting him often. One fine day, Michel’s friend who is a ladies’ football coach gets badly injured and Michel is left to lead the side as a new coach. But the twist in the tale aries when the ladies in the team strictly do not want him as their coach. Why did they do this? What is the reason? Who is this Michel? What is his past and how does Michel train the team and win the tournament finally? To know this, you have to watch the film on the big screen.

Vijay’s stardom is on another level in this film and that has been captured superbly by director Atlee. He showcases Vijay in two different roles and the star hero does supremely well in all departments. Special mention to Vijay’s football skills and the way he acted in all the emotional scenes. Vijay as the aged gangster is superb and has a terrific screen presence. Vijay’s speech in the climax and the manner in which he deals with each of the players is good.

The film is supremely rich and special mention to the VFX department for showcasing all the football matches in a stylish and international manner. Nayanthara looks beautiful and plays her supporting role quite well. Vivek did his bit in the comedy. Kathir as Vijay’s friend was also good.

Jackie Shroff as the main villain was apt and did his role sincerely. Arjun Bajwa as Vijay’s opponent coach was also good. The emotions showcased in the second half are extremely good and elevate the film completely. The back story behind each player and how they are emotionally charged in the film have been superbly narrated by Atlee.

The film deals with women empowerment and that has been captured well and it suits the Tamil culture and nativity well. Last but not least, A R Rahman’s music and BGM is a big advantage to the film. He has just taken the film to another level with the BGM which is emotional and adrenaline pumping.

One of the biggest drawbacks of the film is a storyline which is quite old. The film is a rehash of several sports drama’s in the past and has been added a lot of mass and commercial angles to make the film relatable. The first half of the film is quite slow and Atlee takes forever to enter the main storyline.

It is only during the interval pont that the film gets clear and its actual agnda is showcased. Though Vijay’s thrills and mass elements are good, it takes a lot of time. The love track between Nayanthara and is very dull and does not have anything interesting. The second half is very predictable as all football matches and thrills that come in have been showcased before in Bollywood films.

The makers have spent a bomb and that showcases the film in a superb light. Upon this, camerawork by Vishnu is top-notch as the thrills in the football match have been captured quite well. Telugu dubbing is decent and so were the lyrics in the songs. Production design needs a special mention as the manner in which the game, local set up and crime backdrop is superb. Editing is just about okay as the film needs to be edited out for at least ten minutes in the first half.

Coming to the director Atlee, he once again proves that he is the showman in Tamil cinema. His vision and the manner in which he uses a star like Vijay to narrate a sports-based subject with women empowerment is very good. He has given all the Tamil fans plenty to enjoy as he catered to the fans, family and touched all crucial emotions. But when the film is watched here in Telugu, the first half is weak as nothing much happens in the first half and the emotions are also weak during this time. He nicely covers it up in the second half and makes for good content.

On the whole, Whistle is an emotional sports drama that will surely click with the Tamil audience as it has relatable emotions, Vijay’s star-studded screen presence, and all the needed mass elements. The second half has good emotions and the message shown will click well with all sections irrespective of the language. But for the Telugu audience, the story is a bit routine and such films have already come out earlier. Vijay’s fans will have a ball but for the normal audience, this film ends as a decent watch this weekend.