Review : Wife of Ram – Murder for a cause 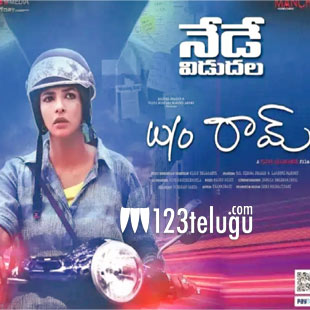 It has been quite some time since we have seen Manchu Lakshmi on the big screen. After a brief gap, she is back with a murder mystery called Wife of Ram which has hit the screens today. Let’s see how it is.

The story starts on a very serious note with Deeksha(Lakshmi) suffering a major setback in the form of her husband and child’s death in a tragic murder. A desperate Deeksha seeks the help of the cops but they do not support her one bit. Upset with this, she starts investigating the mystery herself. Rest of the story is as to how she solves all the loopholes in the case​ ​and nabs the criminals.

The basic twist that is showcased is unexpected and elevates the film completely. The main action begins in the second half as the major twists and drama are unfolded with​ ​a racy narration. The last fifteen minutes in particular are very gripping.

Priyadarshi is decent in his supporting role of a cop. The message that has been showcased during the end looks convincing. Wife of Ram is a tailor-made role for Lakshmi Manchu as she was good during all the investigation scenes and carries the film on her shoulders.

​Adarsh Balakrishna is terrific as the baddie and does his role to perfection in the second half. It will be good to see him do such roles more as he has a lot of potential. The fact that the film does not get deviated with unnecessary commercial elements is good.

Even though the unexpected twist is good, the build-up to it could have been even more engaging. The investigating scenes are a bit unclear in certain areas and have not been explained well.

Things happen so easy for Lakshmi Manchu in the proceedings which looks a bit odd. After the initial fifteen minutes, things get slightly bogged down in the first half and scenes like Lakshmi going to a lady escort look a bit dragged. The interval bang is also just about okay and does not have the required punch.

The camera work in the film is top notch as the mysterious scenes have been showcased quite well. Even though the film is made on a limited budget, the locations look fresh and Hyderabad has been showcased in a new light. The background score is just about okay and could have been a lot better. Editing is crisp as the run time of the film is perfect. Dialogues are neat and so was the production design of the film.

Coming to the director Vijay Yelakanti, he makes a decent debut with this film. He has written a superb twist and weaved a story around it. If he had packed the first half with even more gripping elements, things would have been better. But the way he has handled the twist and made the second half interesting showcases his talent.

On the whole, Wife of Ram is a passable murder mystery which has a superb twist in the end. Director Vijay Yelakanti sets an interesting premise for this thriller but the first half is a bit dull. If you ignore this part, then the second half is filled with enough drama and thrills which will keep you hooked till the end. Watch it if you like suspense thrillers.