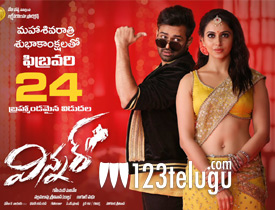 After the debacle of Thikka, Sai Dharam Tej is back with yet another action entertainer called Winner. Directed by Gopichand Malineni, this film which has Rakul Preet as the female lead has hit the screens today. Let’s see how it is.

Siddhu(Tej) shares a very close relationship with his father(Jagapathi Babu) which does not go well with his grandfather(Mukesh Rishi) who is money minded. A meticulous plan is made and Siddhu is forced to run away from home during his childhood.

On the other hand, Siddhu grows up and falls in love with Sitara(Rakul). Right when he is all set to propose to her, Sitara’s dad fixes her wedding to Jagapathi Babu’s son Aadi(Thakur Anoop Singh).

Tej gets a shock of his life when he finds out that Aadi is a goon in disguise. Rest of the story is as to how Siddhu clears all his problems and proves to his father that he is his real son.

Sai Dharam Tej is probably the best thing in Winner. Right from his look to his performance, Tej gives a sincere performance and lives up to his expectations. He has carried the entire film on his shoulders and is the major asset for the film. Rakul Preet Singh provides the necessary eye candy and her pairing with Tej is pretty good. Rakul looks gorgeous in the songs.

Winner has some good comedy in the first half as Vennela Kishore and Prudhvi provide superb laughs. Interval bang is decent and so were some emotional scenes between Tej and Jagapathi Babu. Anasuya’s song is very good as she shines in her cameo and looks a million bucks in the special song.

Jagapathi Babu had an important role and he tries his best to bring depth to the film. Production values are decent and so was Mukesh Rishi in his negative role. Special mention to Thakur Anoop Singh who does a great job as the young villain. He is presented in a very stylish and impactful way.

One of the biggest drawbacks of Winner is the cinematic liberties taken. The way Jagapathi Babu’s role is etched during the second part looks over the top. There are too many scenes which look forced and all of them are justified only during the climax which does not create much impact. Even though Ali’s comedy is good, his track dilutes the depth in the serious proceedings.

Mega fans will be disappointed as Sai Dharam Tej has not danced to his capability. The choreography is very poor in the songs and they do not excite or entertain you much. The makers have been boasting that the film will have some top notch horse riding scenes but they are just about okay.

Winner has top notch production values as the film looks quite grand. Right from the locales to the superb camera work by Chota K Naidu, the film has some very good visuals. Music by Thaman is average but his background score is impressive. Dialogues are decent and so was the styling done to the actors. Editing is decent and as said earlier choreography is quite bad.

Coming to the director Gopichand Malineni, he has done a half-hearted job. Even though the basic plot of the film is very good, he dilutes it with a very ordinary narration during the second half. The family emotions and the way the Jagapathi Babu’s character gels with the hero, everything looks stretched out. However, Gopichand strikes with adding good humor at regular intervals which save the film to an extent.

On the whole, Winner is a typical commercial entertainer which has some good moments throughout the first half. A very good plot is diluted after half time by some below average execution. It will be very interesting to see how this film performs during this crunch exam season. There is nothing new that you have not seen before in Winner but Tej’s standout performance and some good comedy make this film an okay watch this weekend.