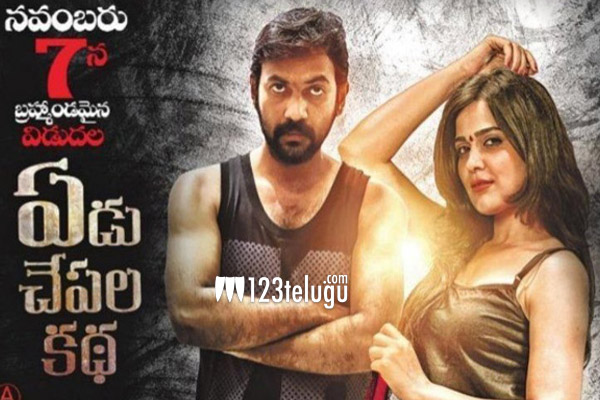 Yedu Chepala Katha is a film that has created a very good buzz prior to its release. The adult comedy has made its way to the screens today and let’s see whether it lives to all its hype or not.

Tempt Ravi (Abhishek Pachipala) is a guy who has weakness for beautiful women. As soon as he spots a gorgeous girl, he gets tempted. In this process, he gets into a physical relationship with many ladies. One fine day, he falls in love with Bhavana (Ayesh Singh) and gets into a serious love affair with her. But the twist in the tale arises when he knows about a serious health scare. What is this health issue? Why is he in a relationship with so many women? and what will happen to his love story? To know the answers, you need to watch the film on the big screen.

Abhishek, who did the role of the main lead is very good with his performance. The manner in which he showcased the weakness for women and how he struggles with it was superb. His love scenes and some emotional moments in the film have been captured well.

Bhanu Sree did well in her role and so was Megha Chowdary. They added a good glamour dose to the film. The small-time emotions showcased in the climax are decent and have been executed well. Some double meaning dialogues will work well with the mass audience.

The film created a lot of buzz because of the hot scenes in the trailers. But sadly, none of them were shown in the film as they were censored completely. Because of this, key scenes and the romance which the common man expects was missing totally.

After a point, too much of double meaning dialogues create disturbance for the audience and make the film look vulgar. The main conflict point in the film is left behind as the makers tried to use adult comedy which did not work one bit in many areas.

Because of so much censor, major scenes are abrupt and scenes have no flow at all. The supporting cast and narration is also very disappointing and make the target audience feel cheated and left out.

The camerawork in the film is decent. The background score was decent enough and so were some double meaning comedy dialogues. Editing is pathetic as there is no flow in the film. The production values of the film are very disappointing. Coming to director Shyam, his idea of exploiting this adult genre in Telugu is good but he went overboard and made the film look vulgar. His hopes were tarnished even more by the censors who chopped off all the so-called scenes and making the film go haywire.

On the whole, Yedu Chepala Katha is a loud and disappointing adult comedy that has nothing going its way. The film will get some openings because of the craze but the so-called scenes showcased in the promos have been chopped off by the censors. Except for a few adult comedy dialogues and punches, this film is a big misfire. So, think ten times before you make up your mind to watch the film.