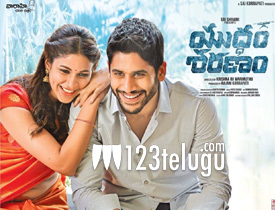 Naga Chaitanya is choosing some very interesting films in the past few years. This time around, he has given a break to his friend Krishna who directs his new film Yuddham Sharanam which has hit the screens today. Let’s see how it is.

The story of the film is quite simple and old. Arjun(Naga Chaitanya) and his parents, Rao Ramesh and Revathi lead a very happy and simple life with their family. The twist in the tale arises when Arjun’s parents witness a murder which is planned by a dreaded criminal called Nayak(Srikanth). Things become even worse when Nayak lays a counter attack and kills them brutally. Rest of the story is as to how a young Arjun handles his family and takes his revenge.

The first half of the film is pretty good as the family emotions are established quite well. Rao Ramesh and Revathi perform extremely well in their roles bringing a lot of depth to the proceedings. Naga Chaitanya and Lavanya’s chemistry also works fine for most of the time.

Naga Chaitanya is surely maturing with every film of his and carries the film on his shoulders. Romance wise, he is the best in the recent generation and he has done an impressive job with his expressions. Lavanya looks good and does her role well.

Srikanth looks menacing as Nayak and tries his best to elevate the proceedings. Murali Sharma’s role has been written quite convincingly. The usage of drone camera to save a life has been showcased superbly.

The problem with Yuddham Sharanam is the weak second half. The director builds up the family drama and twists so well that you get very excited and eagerly wait to see what would happen in the second half. But this is where the film falls as director hurries up things and ends the film a bit too fast.

The family bonding or the emotions showcased during the first half are not carried on to the second part. Director Krishna does not generate the required pain or vengeance on hero’s face which is needed when one’s family is destroyed. Same is the case with Srikanth’s role. He is elevated so well during the first half and is diluted in the later part. The way his plans work or the way his character is ended in the film look over the top.

The film clearly has a hangover of Sahasam Swasaga Sagipo as Chaitanya’s characters in both the films keep hiding from the bad guys and some how fights back in the end.

Yuddham Saranam has some very good visuals. The camera work is delightful and nicely showcases all the emotions and locations quite well. Music by Vivek Sagar is strictly okay as the songs only come in the narrative. His background score waivers a lot as it is good in some places and disappoints in crunch scenes. Production values by Vaarahi are always good and same is the case with this film too as Yuddham Sharanam looks quite classy.

Coming to the director Krishna, he has done just an okay job in his debut. When a debutante director like him picks up a routine story, one needs to pack it with good moments throughout. Script wise, Krishna does a decent job but his execution lacks the punch in the second half. His narration gets slow and too much of liberty is taken in the proceedings. The pain that a person undergoes after losing his family is somehow not showcased and this is where the emotions look artificial and hurried.

On the whole, Yuddham Sharanam is a film which starts off on a positive note but fizzes out during the later part. Superb family emotions during the first half keep the audience hooked. But as in all the recent Telugu films, director Krishna too looses grip on the second half and ends things in an unconvincing manner. For the regular audience, there is no entertainment factor and this might go against the film. Finally, all those who like revenge dramas with a twist and are okay with the slow pace, give this film a shot but there is nothing new that you will get to watch here.