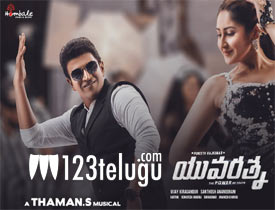 Kannada Powerstar Puneeth Rajkumar joined hands with KGF producer Vijay Kiragandur for his latest action drama, Yuvarathnaa. The film has had a simultaneous release in Telugu today. Puneeth took a special interest and promoted the Telugu version. Let’s see how the film is.

But Gurudev is aided by a resilient student named Arjun (Puneeth Rajkumar). What is Arjun’s motive behind standing by the college and Gurudev? Will he succeed in ensuring the college regain its lost glory and end corruption? You will have to watch the movie in cinemas to know the rest of story.

Puneeth Rajkumar exudes heroism in a dynamic manner. He excels in performance and fights. Prakash Raj once again arrests audiences with his earnest performance. The production values are grand and a lot of money went into the making since the film is made under the banner that gave the KGF franchise.

The entire story runs as per the hero’s convenience. He resolves all the issues within the college in a jiffy. The chemistry between Puneeth and Sayyeshaa fails to sizzle. The young beauty is only used for songs and a couple of scenes and nothing more. The climax of the film is far too simplistic and leaves a lot to be desired.

Apart from the routine and superficial story, Yuvarathnaa largely suffers from the overload of mass elements and unnecessary heroism elevation. Each and every fight was choreographed and too many slo-mo shots were used as if they’re hero introduction scenes. Adding to this, Thaman’s loud background score adds to the woes.

Director Santhosh tried to convey an important message on the commercialisation of the education system in the most commercial manner possible. The story and the way it was conveyed on the screen and even the main characters are pretty ordinary.

Except for the Paatshaala song, none of the songs composed by Thaman will be remembered once the movie is over. The cinematography is neat and translates the grandeur onto the big screen. Editor should have been more ruthless in chopping off a few unimportant scenes, especially involving students’ parents in the second half, as they drag the film into an aimless zone.

On the whole, Yuvarathnaa is just another hero-dominated film that doesn’t serve the purpose it starts off with. Too much of convenience and the liberties taken in the narration make you feel that you are watching yet another commercial potboiler on education commercialisation. You may check out the movie if you are a Puneeth Rajkumar fan and loves typical mass masala action dramas.