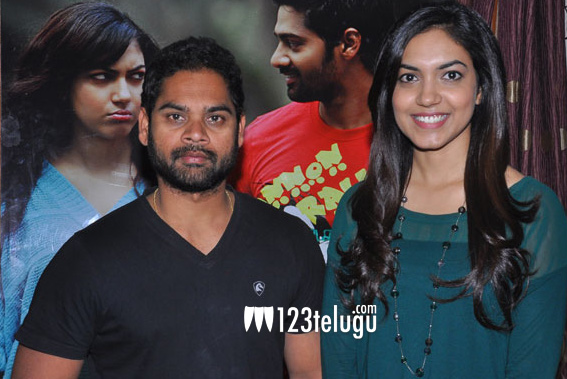 Young hero Naveen Chandra, made quite a good impact with his first film Andaala Rakshashi. He is now back with his third film in Na Rakumarudu. Srinivas, an assistant director with Puri Jagan is making his directorial debut with this film. Both Srinivas and the film’s leading lady, Ritu Varma, caught with the press for a brief chat. Let’s see what they have to say.

How was the whole experience in doing a full length role ?

Ritu answered this question by saying that Na Rakumarudu was the first film she signed, but Prema Ishq Kadal released first. She also added that she plays the role of Bindu, who is a bubbly and fun loving girl. As her character goes through a lot of changes, Ritu said that it was quite a good learning experience for her.

How did the project materialize ?

This question was posted to Shiva, and he said that he had written a different story as his first film, but when the producers asked him for a love story, he wrote Na Rakumarudu. He also added that this film has a nice message for ladies, which has been told in a very entertaining manner.

How did you select the lead pair ?

I watched Andala Rakshashi and liked Naveen’s performance. When I approached him for the role, he was not convinced that he could pull off such a light role. But after a lot of encouragement, he decided to take it as a challenge and do it. Coming to the heroine, director Shiva said that he signed Ritu after seeing her in a short film..

What are the highlights of the film. Will there be any glimpses of your Guru, Puri Hagan in the film?

Shiva concluded by saying that story and heroine’s character would be the major highlight. Except for one fight, the entire film will not have any Puri sir’s mark of film making.