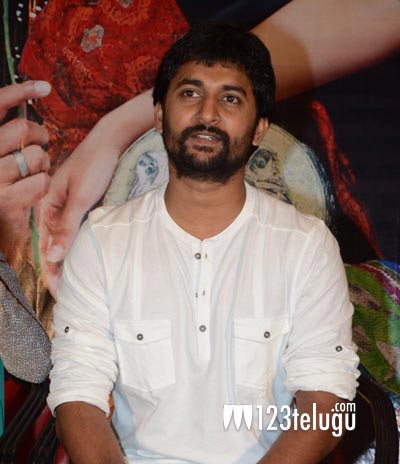 Hero Nani is having a very busy month, with a host of new releases. After ‘Paisa’, he is now getting ready for the movie ‘Aaha Kalyanam’ which is set for a release on February 21st. Nani interacted with media members today and spoke about his upcoming release. Here is a brief transcript of that conversation for you.

Q) Did you choose a remake because it is a safe bet?

A) Many people think that a remake is an easy job. But a remake is one of the toughest projects to tackle. The movie Band Baajaa Baraati is a big hit in Hindi and many people would have seen that. Now to act in the same story in a fresh and original way is quite tough. There were some reports that a Telugu movie has come out with the same concept. Well, basically we have only 5 or 6 basic themes and some hundreds of films get made based on those themes only. If the film is good, people will watch it. ‘Aaha Kalyanam’ is going to be a very fresh and different film in every way.

Q) Did you change the story of the film?

Q) What can you tell us about Vani Kapoor?

A) Vani Kapoor is a dedicated actress. She tried to bring an original flavour to the proceedings. She has managed to create a good buzz here, even before the film has released.

Q). Are you happy with the response to the audio album?

A. Yes. The music has become a big hit and I am very happy about it. The ‘Punch Song’ has become very popular these days. Initially, I was apprehensive about this song but the team was convinced. Now, it is the most popular song of the album.

Actress Vani Kapoor also spoke at the event and expressed her happiness about being a part of Yash Raj’s maiden south Indian production.