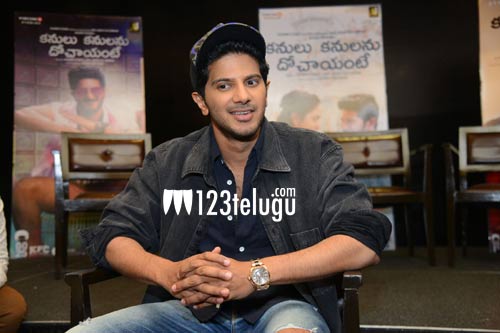 Dulquer Salman is ready with the new film Kanulu Kanulu Dochayante. On this occasion, we met with him for a detailed interview. Here is the transcript.

The response to Mahanati was too good. The manner in which I was appreciated for my role made me very happy. I have received immense love for the film and thank the Telugu audience for showing such love.

What are you doing films in so many languages?

There has never been a plan to stick in one language from the beginning. I take one film at a time and think about the subject. If the subject chooses a pan-India angle nothing like it. For me, language is not a barrier as I can speak many languages now.

Will you keep doing character roles?

What’s wrong with that. For me, the role should excite me in the first place. Once I like my role, I don’t see who is there in the film and do it happily.

The film is a romantic thriller with a superb thrilling element of crime. I loved playing this role as it had shades of both lover boy and negative shades. How all this is used in the film, you need to watch it to understand.

Heard that you are against remakes?

Yes, I am. For me, remakes do not work somehow. I feel that original is always good and somehow an actor like me does not have anything new to do as the audience has already seen that previously.

When will you do a straight Telugu film?

Maybe this year end. I am listening to stories as of now. My other three films are nearing their completions soon and some will come out this year itself.