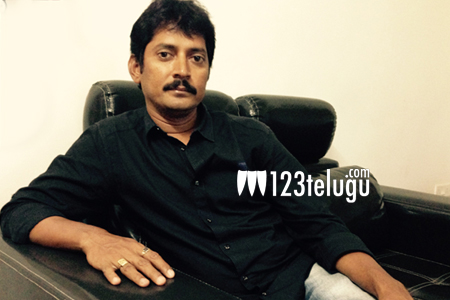 Art director A S Prakash, is one of the most sought after technicians in the industry. He has worked on some mega projects like Srimanthudu, Legend, Aagadu, Seethamma Vakitlo Sirimalle Chettu, Bommarillu and many more hit films. 123telugu caught up with the genius technician for an exclusive interview. Here is the transcript.

I am basically from Vizag and completed my fine arts degree and entered the industry. I worked in Ramoji film city under renowned art director Nitish Roy. I drew sketches for him and assisted him throughout his tenure. That is when Sukumar saw my sketches and offered me Arya.

Q) How has the journey been since then ?

Initially, I was quite happy and content with my job in RFC. But after Arya, I started getting many offers and that is when I decided to take a risk and do my own projects. My journey has been wonderful and I have done close to 50 films till date.

Q) How do you approach a film while designing the sets ?

Firstly, I listen to the story and the theme of the film. The directors narration gives me a complete idea and I draw a few sketches and show them to the director. Once he approves it, I start building my sets.

Q) What kind of preparation goes into the building of these sets ?

Once the final sketches are approved, the real task kick starts. I survey the market as to what colour themes, furniture, and other latest designs have been launched newly. After procuring them, I need to get hold of my team of carpenters and other laymen and start building these huge sets.

Q) Looks like there is a lot of hard work involved ?

Yes ! Our job is the most difficult in the entire film making process. Right from the cameraman to fight masters, everyone comes up with unique ideas and I have to fulfill them by building some user friendly sets. If anything goes wrong, everyone calls me to fix it. I have to be available all the time and see that the shoot goes on smoothly.

Q) Tell us about your recent art works ?

For Seetamma Vaakitlo Sirimalle Chettu, we laid a house set in Hyderabad. Everyone thought that we had actually gone to the village to shoot the film. I did a lot of research and brought in real furniture for the house. Same was the case for Srimanthudu, the entire village set up and Rajendra Prasad’s house was built here in Hyderabad. Likewise, the properties used for 100% Love and the entire house set up in Mirchi were also appreciated big time.

Q) Can you name few of your works which brought you huge appreciation ?

As told you earlier, SVSC was one and the entire sets put up for Alludu Seenu were quite expensive and brought me a lot of appreciation.

Q) Who is your favorite director ?

I don’t have any specific favorite director as I have worked with some highly talented directors in the past.

Q) What was the best compliment you received till date ?

After watching Srimanthudu, Prabhas appreciated me big time. He spoke to me in detail and even recollected the minute details and properties used for the sets. I felt very honored and touched by his gesture.

Q) Your job involves a lot of hardwork. Do you get paid enough ?

Frankly speaking, a number of art directors are leaving the industry and have started doing live events, weddings and other creative stuff. There is less pressure and more money in those events. But here, I have to be on the sets all the time and don’t even get enough time to spend with my family.

Q) You have done close to fifty films. Why are you not widely known ?

That is because I focus on my work and do not interact with any one much. I draw my sketches and am constantly traveling for location hunting or busy building my sets.

I am currently working on Akhil’s debut film and for two other projects under Sravanthi Movies banners featuring Ram as hero.

With that, we ended our conversation with Prakash and wished him the best of luck for his future.